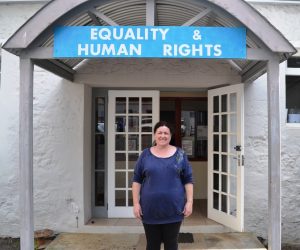 The conference was held in the historic surroundings of Lancaster House, London, from 12 -14 September 2016, and Catherine’s attendance at the conference was funded by the Foreign & Commonwealth Office (FCO).

Facilitated by Human Rights & Child Safeguarding Policy Officer OTD, Camisha Bridgeman (FCO), and Deputy Director of the Northern Ireland Human Rights Commission, Dr David Russell, the conference included sessions aimed at identifying the status of human rights in the OTs and considering what measures can be taken to develop and strengthen access to those rights. Other sessions included developing human rights education, the rights of women and girls, prisoner rights, disability concerns, and extending further rights to the territories, among numerous other topics.

“I had the privilege to work with a passionate and committed group of Human Rights Commission Leaders, UK Legal Advisers and Government Officials from other British Overseas Territories.

“I also had the opportunity to promote St Helena to many people who have never been to the Island before.”

The conference closed with an agreement to establish a support network to enable Human Rights Officers to work together and share knowledge, which will assist in providing better quality advice and information.

The interaction with the FCO gave Catherine a clear insight into the role of the Commission in developing and establishing human rights, to reach the goal of everyone in the OTs having the same rights as our fellow British citizens in the UK.

“The most positive thing about the conference was discovering how far ahead of the other territories we are in many aspects of human rights, including being one of the few to have an established and independent Equality & Human Rights Commission.”