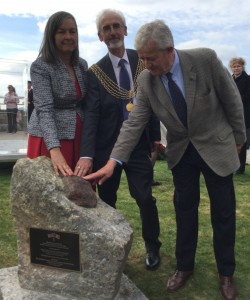 A plaque to mark the amazing ten days Napoleon Bonaparte spent captive in Plymouth Sound in the UK was unveiled on Friday 16 October 1815 – exactly 200 years since Napoleon first set foot on St Helena.

The monument, a piece of stone from St Helena, embedded in granite from Dartmoor prison – where thousands of French prisoners were held during the Napoleonic Wars –  was unveiled by Alain Sibiril, Honorary Consul of France in Plymouth and the Lord Mayor of Plymouth – together with Mrs Kedell Worboys MBE, St Helena Government UK Representative.

The volcanic stone embedded in the Dartmoor Granite comes from Longwood House, Napoleon’s home on St Helena, and was transported to Plymouth by the French Navy and Brittany Ferries. It bears the inscription ‘May our hearts be open to friendship and our arms reach across the sea to unite our two nations’ – written by Mrs Melisande
Fitzsimons, a French poet living in Plymouth.

“This has been a fantastic event and has helped bring a fascinating piece of Plymouth’s amazing history to a wider audience.

“People will be able to walk past this place and imagine the scene in 1815 when thousands of people flocked to see Napoleon. The Napoleonic Wars shaped this city and we are delighted to have our French friends here to mark 200 years of friendship.”

“A little piece of St Helena will now always be in Plymouth.”

“2015 is an appropriate time to commemorate the enduring peace which has prevailed between our two countries as friends and allies. These stones and plaques will not only be another historic landmark for our maritime city but are intended to help ensure our close relationship endures.”

The commemorative stone and plaque on Madeira Road, Plymouth, have been funded by Alain Sibiril with the help of Plymouth City Council, the Franco-British community, St Helena Tourism and Brittany Ferries.

Representatives from HMS Northumberland, together with Officers from the French Navy, were also guests at the ceremony – along with another rather large guest – the Brittany Ferries vessel, Pont Aven – which appeared in the Sound and blew her horn in appreciation.

Napoleon was held in Plymouth onboard HMS Bellerophon from 26 July to 4 August 1815 following his defeat at Waterloo, while the British Government decided his fate.

Thousands of people from Plymouth and much further afield, came to try to catch sight of the ‘Fallen Emperor’ – a man the British had been fighting for some 22 years.

He was sent into exile on the South Atlantic Island of St Helena. Napoleon, onboard the HMS Bellerophon left Plymouth Sound, before being transferred to HMS Northumberland for the long voyage south. He died on 5 May 1821, in exile, on St Helena.

This event coincided fittingly with the end of the Napoleonic Bicentenary events held on St Helena.