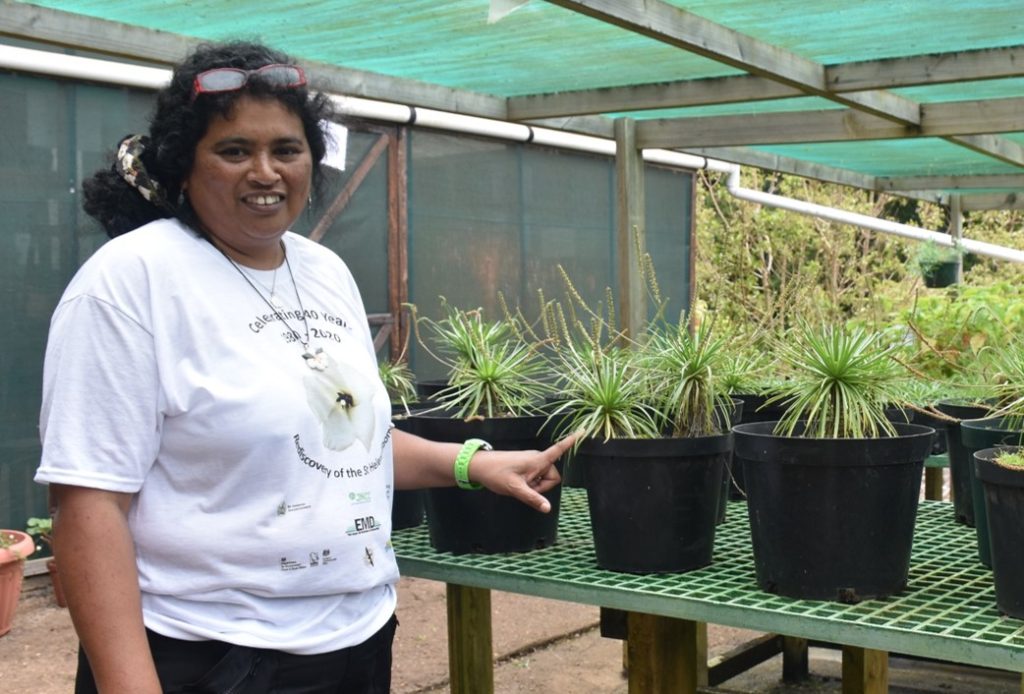 HE Governor Dr Philip Rushbrook is pleased to announce the following New Year Honours 2022 Award, as endorsed by Her Majesty the Queen, to be published in the Overseas and International Honours List on 1 January 2022:

Vanessa Thomas-Williams is being recognised for demonstrating unstinting commitment to conservation on St Helena. Vanessa started her career in conservation from a very young age working alongside of renowned Conservationist, the late Mr George Benjamin BEM. Vanessa developed a passion and drive for the restoration of St Helena’s critically endangered plants species with the aim of increasing their existence to sustainable and thriving levels.

Vanessa’s expertise in this field was further developed through professional training and exposure to horticultural work during her time spent at Kew Gardens back in 2005 where she was employed. Despite good prospects of remaining at Kew Gardens working alongside of some of the most highly regarded experts and scientists, Vanessa chose to return to St Helena to apply her expertise in helping to re-establish some of the most unique flora and fauna in the world.

Some of her most notable achievements include the revitalisation of the nursery at Scotland, where she encouraged and trained colleagues to implement good horticultural, propagation and seed banking practice. The seed bank now holds overs 3000 collections representing many endemic flowering plant species. Another example of Vanessa’s exemplary work was her commitment to saving the rare species of the Bastard Gumwood when it was thought to be nearly extinct after its rediscovery in 1982.  This intensive propagation project under Vanessa’s leadership started in 2009 and has to date produced over 6000 new trees now planted at various locations around the Island.

To date, Vanessa continues her work, advocating and showcasing the Island’s unique species with unwavering commitment, by taking part in events and talks which actively encourages interest and participation in conservation work. There are over 45 endemic plant species and many now grow abundantly in public spaces such as post box walks, which can now be enjoyed by both residents and visitors to the Island alike. These unique plants are a testament to the hard work invested by Vanessa and her team.

Vanessa acts as a conservation champion for St Helena. She has teamed up with universities and institutions abroad and conducted studies where several new and important discoveries have been made on improving conservation techniques.  Through many other engagements and initiatives Vanessa has helped put St Helena on the global conservation stage. Vanessa’s achievements and continuous efforts in protecting the Island’s inherent endemic plant species are highly regarded by international conservationists and her positive contribution towards enhancing global biodiversity has been recognised as highly deserving of this award.

Nominate Someone for an Honour

Honours are awarded to recognise outstanding achievements and service to the community. For example, long-term voluntary service, innovation and entrepreneurship, and improving life for people less able to help themselves. Honours are given to those working in various different fields of work. This includes community, arts and media, health, sport, education, science and technology, environment, business and economy.

Anyone can nominate someone for an honour. To find out more on the Honours system please visit: www.gov.uk/honours. Further information can also be obtained from Kerry Lane in the Governor’s Office via email: Kerry.Lane@fcdo.gov.uk and at the Administrators’ Offices on Ascension and Tristan da Cunha.