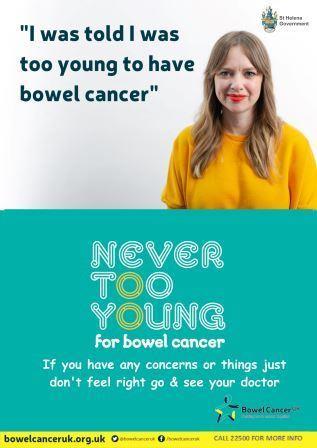 April is ‘Bowel Cancer Awareness’ Month. The Health Services Directorate’s Health Promotion and Oncology teams are working together to raise awareness of Bowel Cancer and to encourage its prevention, early detection and treatment.

Bowel Cancer also known as ‘Colorectal’ Cancer is the UK’s second biggest cancer killer and is one of the more prevalent cancers on St Helena. Bowel Cancer occurs mostly in the large bowel, which is made up of the colon and rectum, affecting anyone of any age. Although more predominant in those aged over 50, more than 2500 new cases are diagnosed each year in the UK in people under the age of 50.

The earlier Bowel Cancer is diagnosed, the easier it is to treat. Symptoms to look out for are:

Most people with these symptoms don’t have Bowel Cancer. But if you have one or more of these, or if things just doesn’t feel right, go and see your doctor.

Whilst we don’t know what causes most Bowel Cancers we do know these factors may increase the risk of developing Bowel Cancer:

Scientists believe that around 54% of all Bowel Cancers could be prevented by having a healthier lifestyle. You can reduce your risk by:

As part of Bowel Cancer Awareness Month, the Health Promotion and Oncology teams are calling on St Helena Government staff, private businesses, and members of the public to join us and participate in a Mufti Day on Wednesday, 27 April 2022. Together we can raise further awareness and support for Bowel Cancer. Any collections of monies or donations can be made to the local ‘Cancer Awareness Charity.’ All those participating are asked to wear ‘Royal Blue’ to show your support.