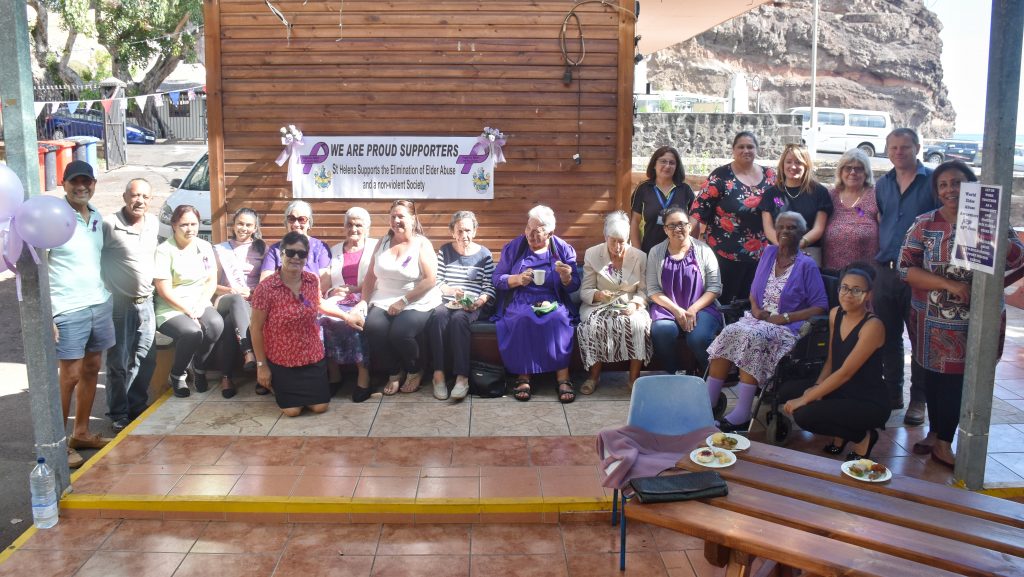 World Elder Abuse Awareness Day (WEAAD) – used as an opportunity for communities around the world to promote a better understanding and raise awareness of abuse and neglect of older persons was commemorated on Tuesday, 15 June 2021.

On St Helena, WEAAD was recognised with a number of events which took place between 11 and 15 June and concluded with a Ceremony held at the Mule Yard on Tuesday, 15 June.

In her speech, Nicolene said:

“I wish to sincerely thank the UN for the funding of the Campaign for the past five years, thank you also to all the staff of the Children & Adults Social Care Directorate who worked tirelessly to ensure the success of the Campaign, especially the WEEAD Committee, under the leadership of Deborah Knipe.

“Once again today the message goes out to each of us, to be informed and aware of services available to the elderly, to diligently and honourably uphold and support the rights of all our elderly to live with dignity and respect. We are also being challenged to take the time to visit, to speak to, to offer help, to care and keep our elderly safe. Tata Mandela very passionately said ‘It always seems impossible until it’s done”.

Leading up to the day, wooden purple ribbon figurines were displayed on the Post Office building and at the Princess Royal Community Care Centre (CCC) and were illuminated at the launch of the Campaign on Friday evening, 11 June, and throughout the Campaign. A banner and posters were displayed at the Post Office building and throughout lower Jamestown, the CCC and the General Hospital. Awareness raising radio interviews also took place and Miss St Helena and her two runners up, along with Nicole Paulsen, visited the elderly in Hospital and presented them with gifts. A tea party was held at the CCC on Monday,14 June, for residents of the CCC, Deason’s Centre, and Cape Villa. Residents, along with their visiting family and friends, enjoyed afternoon tea and cakes and were entertained with music by the ever popular Mr Keith (KJ) Joshua. In addition, a special ‘Tribute to the Elderly’ radio programme was held on local radio on Monday,14 June, and many religious dominations highlighted WEAAD and honoured the elderly in their congregation on Saturday, 12, and Sunday, 13 June, where gifts were presented.

“Overall the Campaign was a success and it was evident that the wider community is being supportive in raising awareness.”