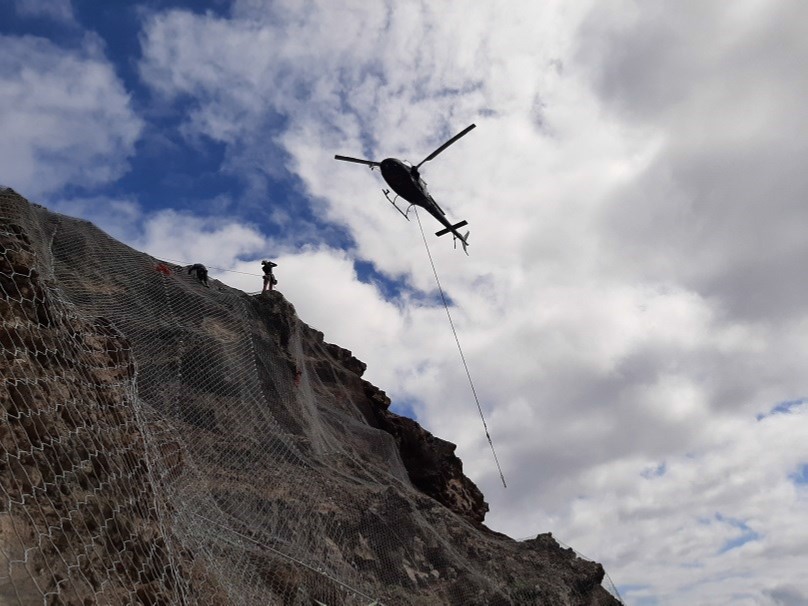 Residents of Jamestown will now be able to see the fence posts of the three new rockfall barriers above the Hospital. Construction of these fences will take place towards the end of June. At Ladder Hill, the final two rockfall barriers are now complete and commissioned into use. There will be no further Ladder Hill Road closures – CAN France appreciates the patience the public has shown during this time.

The seven rockfall barriers of Maldivia Road have been set up, and are awaiting the arrival of final fixtures on the MV Helena Voyage 29 before these can be commissioned into use.

Construction of the lightweight catchfence at Mundens Path has re-commenced following completion of cargo operations on the Wharf. This fence is designed to catch blocks which may fall from the wall. CAN France will continue to drill and grout anchors, set up fence posts and lift netting (using the helicopter) until the next arrival of the MV Helena. Once cargo operations for Voyage 29 have been completed, CAN France will return to the Wharf once again to complete the fence.

High tensile spider netting now drapes over the crags above Rupert’s Jetty. A team of Rope Access technicians has been working in tandem with the helicopter to lift the netting and fix it in place. The team will be working hard for the next two weeks to lift the remaining netting panels, before the helicopter leaves the Island on Voyage 29. Passive draped rockfall netting will be installed on the vertical rock face next to the Jetty Access Road within the next two weeks.

The remainder of works in the Valley will be completed in July. This includes construction of rockfall catchfences at Lower Rupert’s, the Power Station and the Bulk Fuel Installation as well as installation of rockfall netting on the Access (Haul) Road. A short term road closure will be required on the Access Road which will be communicated to the public in due course.