Three primary sources have been used to compile this bulletin: population censuses (from 1978, 1987, 1998, 2008 and 2016); immigration records collected by the Immigration Office of the Police Directorate, and records of births and deaths collected by the Customer Service Centre at the Post Office. A full set of statistics and indicators can be downloaded in Excel format from the ‘Population’ file on the St Helena Statistics website at: www.sainthelena.gov.sh/statistics-data.

The marked recent increase in St Helenians is due to both the seasonal pattern (St Helenians living abroad tend to visit family and friends around the Christmas period in December and January), and the increased capacity of scheduled airplane arrivals following the introduction of a seasonal mid-week service from Johannesburg.

The number of people arriving to and departing from St Helena (excluding day visitors from cruise ships) has been steadily increasing since 2010 (Chart 2). In the earlier part of the decade, this was due to the construction activity as the new airport was built, and lately this is due to the start of the regular scheduled air service towards the end of 2017.

In most years since 2010, arrivals have exceeded departures, especially between 2012 and 2014 when the airport was being constructed (Chart 3). This in turn has led to the increase in the total population seen in Chart 1. In 2017, the overlap of the start of scheduled air services and the last voyage of the RMS St Helena led to unusually high arrivals in November and December.

Following the completion of the airport, most people staying for more than one night on St Helena arrive by air, with a smaller number arriving by sea, mostly by yacht (Chart 4). In 2018, 5,030 people arrived on St Helena, excluding day visitors on cruise ships. Until 2018, most arrivals by sea were by ship on the RMS St Helena; 2018 saw 3,833 people arrive by air, more than arrived by the RMS St Helena in any previous year.

Almost half of all people arriving to St Helena in 2018 did so for a leisure-related purpose; they were either tourists (the largest group) or St Helenians living abroad returning for a holiday to see family and friends (Chart 5). Business arrivals, which includes people and their families arriving for both short- and long-term assignments, and returning residents made up just over a third of all arrivals. 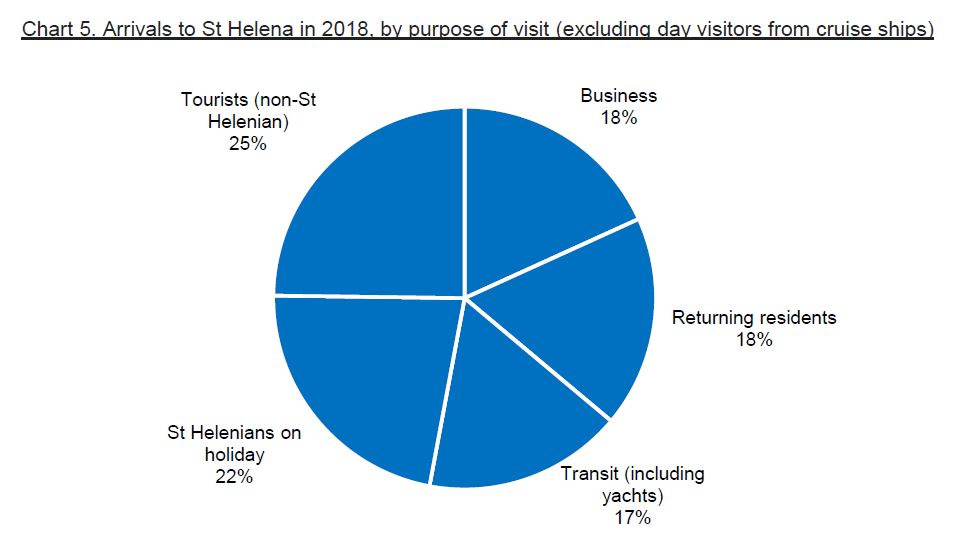 There is current interest in the number of people arriving for leisure purposes; in the regular statistics published by the Statistics Office, these are classed into two groups: St Helenians on holiday, typically visiting family and friends, and other (non-St Helenian) tourists. 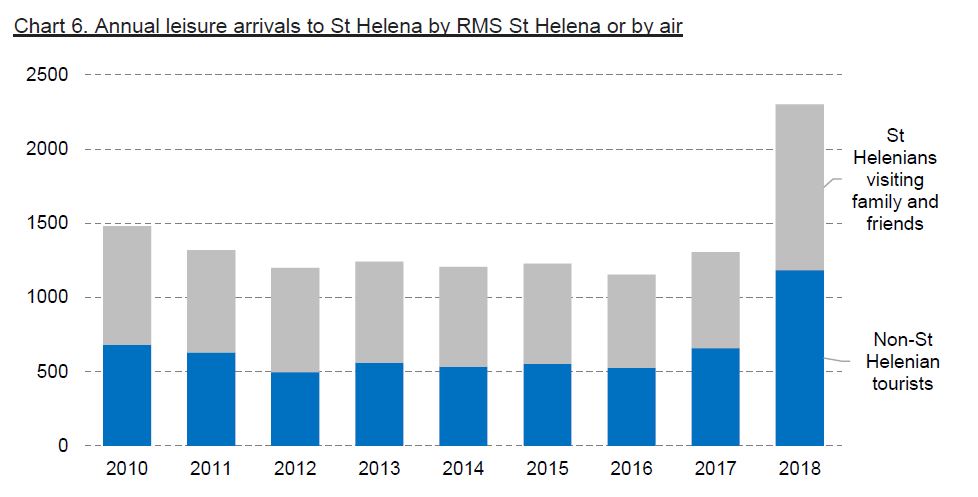 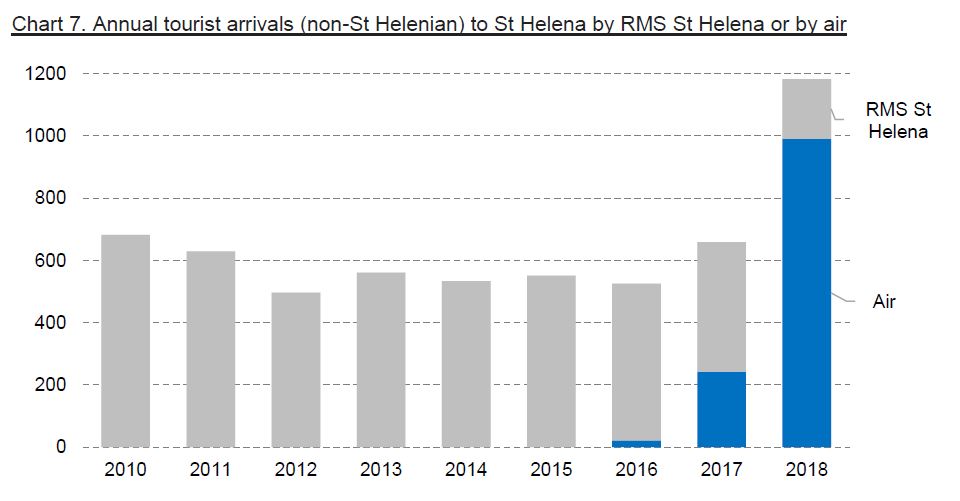 The Statistics Office has recently updated its life expectancy estimates using the number of deaths for 2017 and 2018, and the 2016 population estimates from the Census. Life expectancy is the average number of years a person has left to live, assuming that person is subject to observed death rates. It is a useful statistic to calculate, especially life expectancy at birth, since it is used as a general demographic indicator and often forms the basis for comparisons of living conditions between countries. Annual age-specific death rates have been calculated using averages over ten-year intervals to reduce the impact of the natural variability in the small numbers of deaths (so, for example, 2018 uses deaths from 2009 to 2018). They also use estimates of population groups interpolated between population censuses, since age-group specific totals are not currently estimated. The variability in the estimates between years shown in Chart 15 is likely to be caused by these data limitations, rather than any sudden changes to underlying life expectancies and risk factors. For this reason, the simple linear trend is also shown, and the smoothed estimates are included in the data file.

Typically, overall life expectancy increases slightly as a person ages – even though the expected remaining years of life decreases. For example, at birth, a person may be expected to live to 77, but if that person lives to 50, they may be expected to live to 80. Chart 16 tries to illustrate this; the horizontal axis shows the age of a person, and the vertical axis shows the number of expected remaining years of life having reached that age. So, a person of 50 years is expected, on average, to live another 30 years. To simplify the chart, males and females have been combined, but at every age women have a higher life expectancy than men. 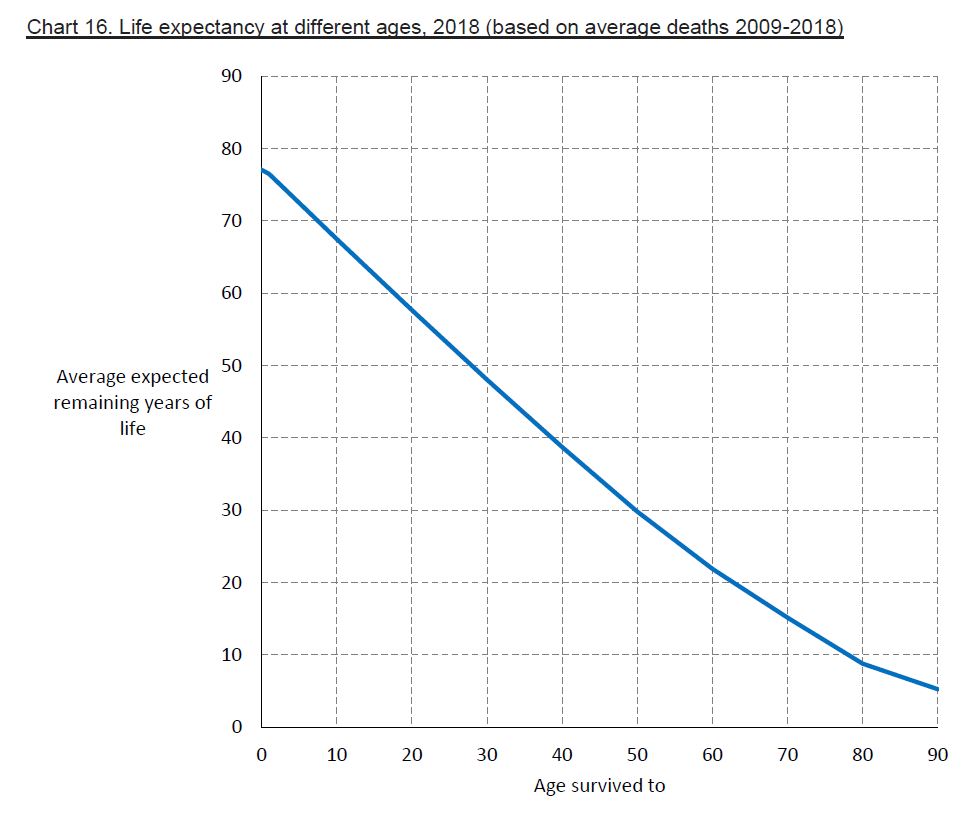 Crude birth and death rates use five year averages of births and deaths, and five year averages of the estimated total mid-year on-Island population (at any year t, the years used for the averages are t-4, t-3, t-2, t-1, and t). Life expectancies are calculated using an ‘abridged’ life table with age groups 0-1, 1-4, 5-9, 10-19, 20-29, 30-39, 40-49, 50-59, 60-69, 70-79, 80-89, and an open-ended interval 90 years and above. The population totals used in the life tables are based on the St Helenian resident population at each census, with inter-census years based on simple interpolation for each age group. 2017 and 2018 use the latest published estimates of the on-island St Helenian population, with the same age-group patterns as 2016. Age-specific death rates are estimated using observed deaths for the previous ten years. Crude annual estimates and ‘smoothed’ estimates using a simple linear regression model have been calculated; data limitations and the small size of the St Helena population means that crude estimates are subject to year-on-year variability which may not reflect the underlying trend.