This visit enabled both Marianne and Ricardo to spend a week in a UK prison to observe what provisions are being used within the prison setting and to gain an understanding of the best practices used within mental health provision. The aim is for both officers to adopt some of those practices now that they have returned to the Island. Marianne was based at HMP Swinfen Hall and Ricardo at HMP Warren Hill.

“It was a pleasure to have Marianne with us at Swinfen Hall. She made some genuine friends whilst with us. We have agreed to send Marianne lots of documents that may be of use to HMP Jamestown. Initiatives around Rehabilitative Culture, Decency, Safety, Violence Reduction and Families Strategy, to name but a few.” 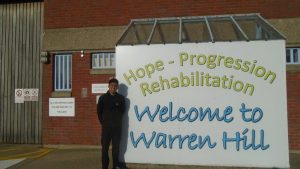 “Ricardo has been a star. He is very polite and respectful and is a credit to HMP Jamestown. I would have him work for me here in a heartbeat. He has fit in so well with both our staff and residents and worked really hard. He has been exposed to everything we have available and has soaked this up like a sponge. We have agreed to keep in touch with him and offer any further help or advice.”

Following their placements, Marianne and Ricardo spent a week at the Prison Service College undertaking more in-depth work around mental health awareness. The course was split into five modules:

“The training was very well received and both Marianne and Ricardo will now be tasked with two things following their return. The first is to impart the training to the other staff in HMP Jamestown, and to use their learning to make improvements within the prison setting for those in our care with mental health issues.

“It was an intensive course with a lot of travelling for both Marianne and Ricardo, but it was invaluable to both of them, as well as to HMP Jamestown’s continued development of dealing with prisoners who have mental health issues.”

This training was funded by the Foreign and Commonwealth Office (FCO) as part of the Conflict, Stability & Security Fund’s (CSSF) Prisons Project under the Overseas Territories Justice, Security & Governance Programme. Eight other UK OTs also participated in the training.