This Bulletin presents the latest estimates of the size of the population of St Helena, the number of arrivals and departures (including detailed statistics on arrivals by air), and the number of births and deaths.

The data released in this Bulletin can be downloaded in Excel format from the ‘Population’ file on the St Helena Statistics website at: www.sainthelena.gov.sh/statistics-data.

The total number of arrivals for the second quarter of 2018 was estimated to be 1,093 (see Table 1). This is much lower than the 1,852 arrivals in the first quarter, when both the new scheduled air service and the RMS St Helena were operating. However compared to a year ago, when there were 770 arrivals in the second quarter, it is a significant increase of 323 people or more than 40%.

Of the 1,093 arrivals in the second quarter, 77% (841) arrived by air, with the remainder arriving by yachts or ships, usually in transit to other destinations. As expected, as a result of moving into the off-peak season, the number of air arrivals in the second quarter was around 200 less than the first quarter, when 1,038 people arrived by air. The last and first quarters of each year usually see a larger number of visits, since these are the warmer months on St Helena, and St Helenians living overseas tend to visit during this period (see Chart 2). 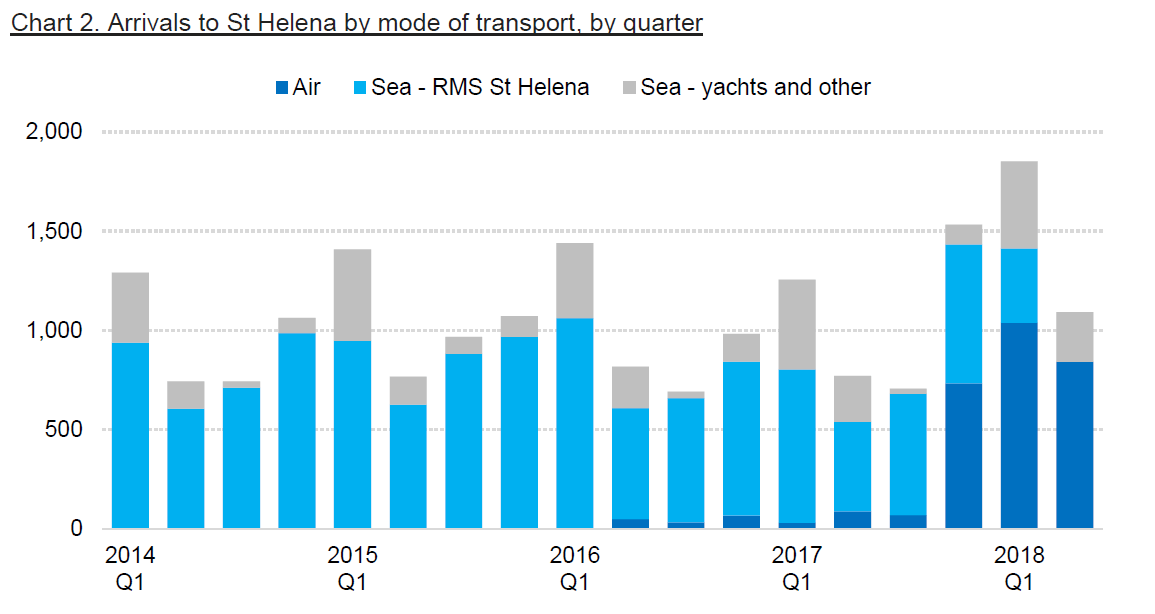 Since the scheduled air service began, 30% of all persons arriving by air have been tourists – excluding those St Helenians who live abroad returning for a short-term holiday, who were around 16% of all persons. People returning to their home on St Helena were a further 24%, and those arriving on St Helena for business, including persons and their families recruited overseas to work on St Helena, were 25% (Chart 3).

Within the group of passengers who came to St Helena for a short-term holiday visit, 35% were St Helenian, 22% were British, and 21% were South African – comprising together just under 80% of all arrivals. Of the remainder, most were from countries in Europe (Chart 4).

Further details of air arrivals are given in Table 1, and in the ‘Population’ data file at www.sainthelena.gov.sh/statistics-data. 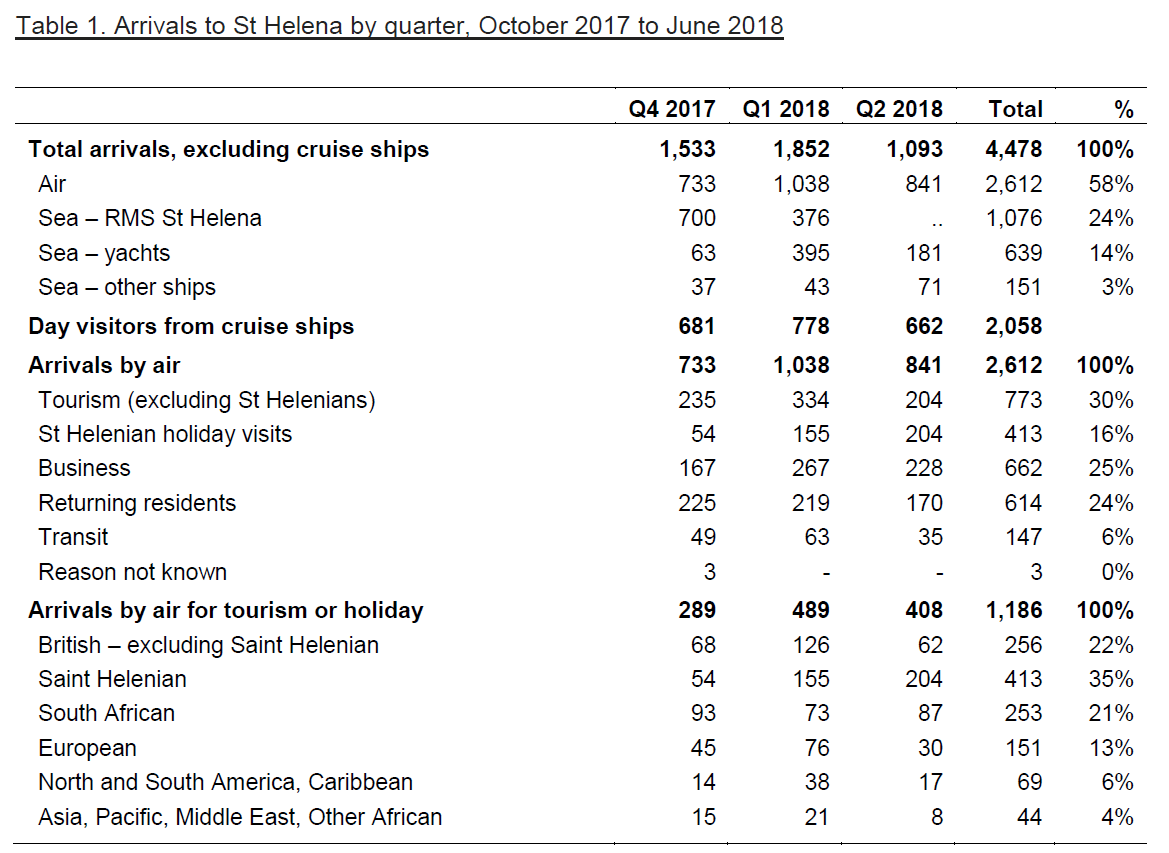 Even though the number of tourists arriving on St Helena was greater than the number of St Helenians arriving for a holiday to visit family and friends, the total number of nights they stayed on the island was less. This is because, on average, visiting St Helenians tend to stay longer than those visiting for tourism purposes (Chart 5).

Table 2 has more details, including totals by quarter and the average length of stay for St Helenians on holiday visits (30 days per visitor) and for non-St Helenian tourists (10 days per tourist). More data, including figures by month from 2010 onwards, are given in the ‘Population’ data file at www.sainthelena.gov.sh/statistics-data. 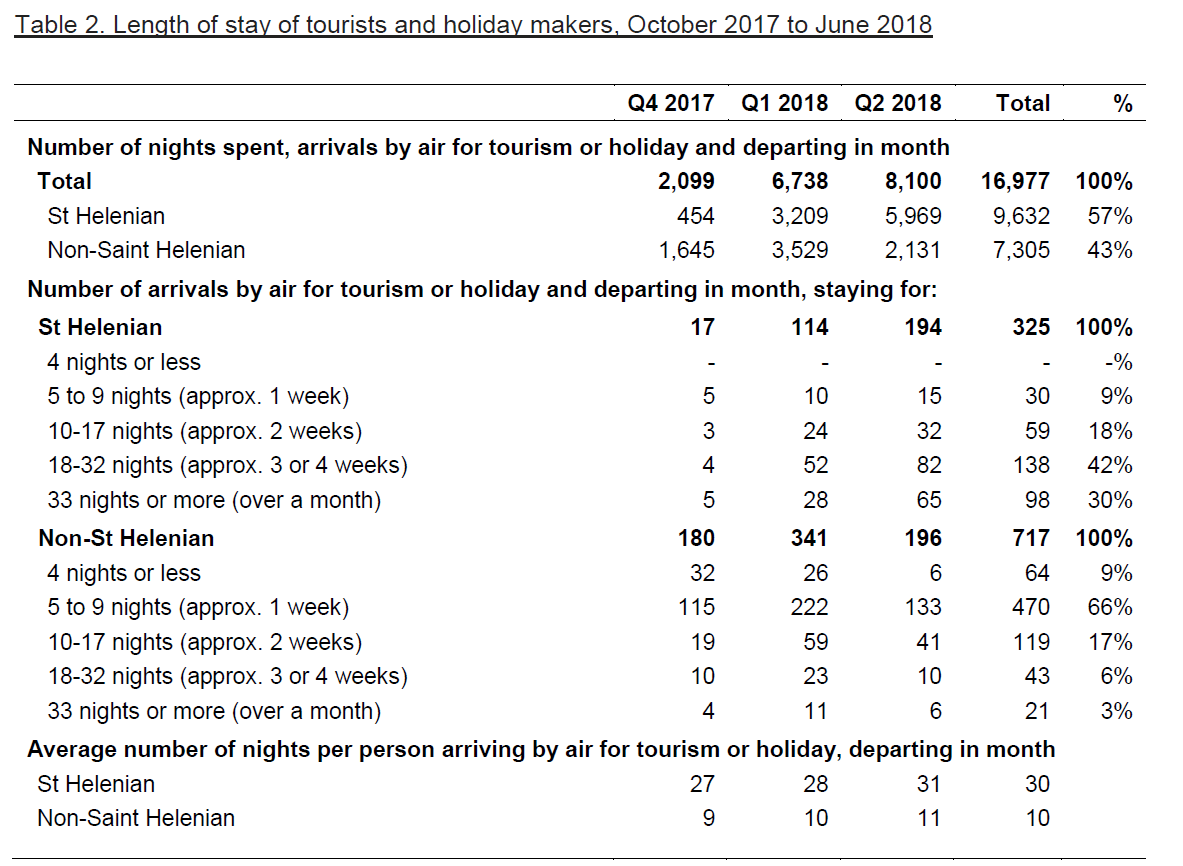 The total number of departures for the second quarter of 2018 was 1,139, substantially less than the first quarter (1,957) but about the same as the fourth quarter of 2017. This reflects the typical observed seasonal pattern, when St Helenians visiting for the Christmas period return in the first quarter of the year. Just over two–thirds of all departures were people returning to their usual place of residence. Some 14% were people who left to take up an overseas employment opportunity or to emigrate, and a further 10% were residents of St Helena departing for a holiday (see Table 3).

In the second quarter of 2018, there were a total of seven births and 13 deaths registered on St Helena; this is almost the same as the previous quarter, when there were also 13 deaths, but six births.

However the number of births almost halved compared to the same period of 2017, where 13 births were reported. In recent years, the number of deaths has exceeded births – during the last twelve months, there have been 27 births and 57 deaths.