St Helena Government is in the process of creating a new detailed topographic map of St Helena, the first update since 1990. Since then, a lot of things have changed, not just a new airport being built with regular scheduled flights and the imminent decommissioning of the much loved RMS.

In 1990, Sat Navs were still an expensive novelty, mostly used by the military. Nowadays, GPS (Global Positioning System) receivers are everywhere, very inexpensive and almost everyone with a smart phone has the ability to find their position with an accuracy of about five metres anywhere on the planet. The 1990 series St Helena 1:10,000 and 1:25,000 topographic maps are based on the old Astro DOS datum setup by the UK’s Directorate of Overseas Surveys (DOS) in 1971. Back then, GPS did not exist and far less precise astronomical methods were used to work out positions in the open ocean like St Helena Island. It turns out that the Astro DOS datum in St Helena is 732 metres off from truth (today’s GPS position). This means that anyone using a GPS in default setting mode with the 1990 series maps will plot their position 732 metres out, which on St Helena could be a serious mistake. 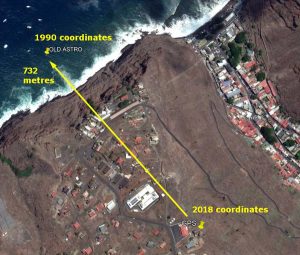 Of course, if you select the Astro Dos 71/4 option in GPS receivers this error goes away but this isn’t the ideal situation for safety reasons. In the ideal world your GPS position in default mode should match up exactly with the map, so this has necessitated preparation of new maps by SHG. The construction of the new airport, associated roads and port facilities has also warranted the update as well of course.

During 2015 and 2016, geodetic surveyors led by Murray Henry from SHG re-surveyed the Island visiting many of the original 1971 trigonometric stations and also surveying all of the post box walk tracks. The surveyors used state-of-the-art geodetic grade GPS receivers to get centimetre accurate positions of the trigonometric stations. The new datum is called the St Helena Geodetic Datum 2015 (SHGD2015) and is directly compatible with the default GPS datum which is called WGS 84. 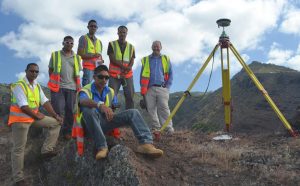 A geodetic consultant from Australia, Richard Stanaway, who first visited St Helena as a tourist in 2009 was engaged to compute the new coordinates and work out the difference with the old coordinates. These transformations were checked using different GIS (Geographic Information Systems) to validate them with the latest satellite imagery over St Helena.

St Helena hasn’t really moved 732 metres, that is just the error of the old datum, but the Island is moving a few centimetres each year as she drifts away from the Mid-Atlantic Ridge. The GPS base station at Longwood run by the Jet Propulsion Laboratory (JPL) of NASA can monitor this tectonic motion precisely. St Helena is a key station in the international monitoring network.

Further information or the full report on this project, entitled ‘Geodetic Datum Modernisation for St Helena’ is available on request from Samantha Cherrett (samantha.cherrett@enrd.gov.sh) or Devlin Yon (devlin-yon@enrd.gov.sh) at Essex House, Tel: 22270.