COMMONWEALTH DAY 2018 – ‘TOWARDS A COMMON FUTURE’

Commonwealth Day 2018 was today, Monday 12 March, celebrated with the raising of the Commonwealth Flag at an event held at the Jamestown Community Centre in the presence of Her Excellency the Acting Governor, Members of Legislative Council, Government Officials, students of Prince Andrew School, and invited guests.

Members of the Prince Andrew School (PAS) Student Council then read the Commonwealth Affirmation and a message from the Commonwealth Secretary General, the Right Honourable Patricia Scotland QC.

HE the Acting Governor, Miss Louise MacMorran, then read the Head of the Commonwealth, Her Majesty The Queen’s message to the people of all Commonwealth countries. The message included the following:

“We all have reason to give thanks for the numerous ways in which our lives are enriched when we learn from others. Through exchanging ideas, and seeing life from other perspectives, we grow in understanding and work more collaboratively towards a common future. There is a very special value in the insights we gain through the Commonwealth connection; shared inheritances help us overcome difference so that diversity is a cause for celebration rather than division.

“We shall see this in action at the Commonwealth Heads of Government Meeting which takes place in the United Kingdom next month, bringing together young people, business and civil society from across the Commonwealth.

“These gatherings are themselves fine examples of how consensus and commitment can help to create a future that is fairer, more secure, more prosperous and sustainable. Having enjoyed the warm hospitality of so many Commonwealth countries over the years, I look forward to the pleasure of welcoming the leaders of our family of 53 nations to my homes in London and Windsor.”

A competition was run in PAS where students were asked to produce a written piece based on the theme for Commonwealth Day 2018 – ‘Towards a Common Future.’ Student, Ella-Rose Stevens, shared her entry called ‘My Common Future Commonwealth Cake’ in which she read a recipe that included ingredients for a happy, healthy and unified Commonwealth, including health, education, love, aspiration, respect, integrity and unity.

Key messages were then read by Councillors Lawson Henry, Christine Scipio-O’Dean, Cruyff Buckley and Government Economist, Nicole Shamier. These focussed on the 10-Year Plan and the draft Sustainable Economic Development Plan, which are futuristic and set out the path for sustainable development that will benefit St Helena and its people. 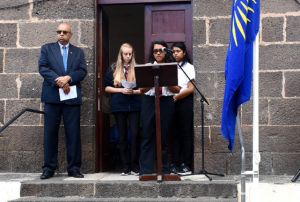 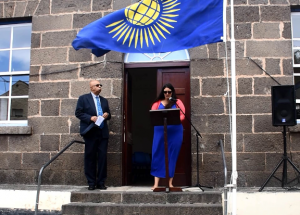 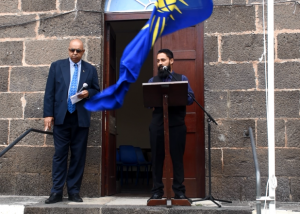 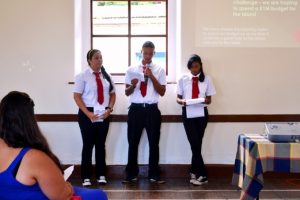 After a quick refreshment break, groups of students from the PAS Student Council presented the Budget Challenge, which replicated the annual challenges faced by the Elected Members to allocate funding for different projects on St Helena.

Students were asked to act as the Financial Secretary and Elected Members and to allocate £1million for St Helena. They had to deliberate current Island issues, prioritise these by importance, and show where and how they would spend their budget on their chosen projects/sectors.

These included implementing improvement plans to Island roads, education, residential care and renewable energy, with the majority of groups referencing the 10-Year Plan. The presentations gave Members of Legislative Council a good chance to hear the views of the Island’s youth.

In his closing remarks, Councillor Derek Thomas, Chairperson of the Commonwealth Day Working Group, thanked all in attendance and congratulated those who participated in the celebrations, making special mention of the PAS students. He spoke about his ambition for St Helena to continue to develop and work alongside other Commonwealth countries towards a common future.