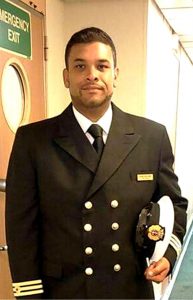 St Helena Line (SHL) is pleased to announce that St Helenian Adam Williams (photo attached), currently Chief Officer on the RMS St Helena, will be promoted to Master of the ship.  Adam will take command during Voyage 252.

Adam started his career on the RMS St Helena at the age of 16 as a Cadet, leaving St Helena in December 1997 to begin college in South Tyneside in January 1998.

During his cadetship, Adam served mainly on the RMS St Helena but was also seconded to other vessels including a four month stint on the Queen Elizabeth 2.

Adam qualified as Officer of the Watch in 2001 joining the RMS in August that year as a 3rd Officer. He was then promoted to 2nd Officer in 2003.

SHL, AW Ship Management & AW Crewing would like to congratulate Adam on his promotion. He is another example of young St Helenians progressing through the ranks to reach the top of their careers.