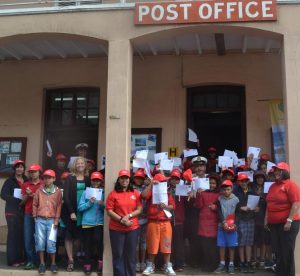 St Helena Primary School pupils today received their long anticipated letters from the Pen-Pal classic exchange programme with pupils from the Mount Stuart School in Cardiff, Wales – organised by the Royal Mail Group in the UK.  The letters had made the two week odyssey on the RMS St Helena, arriving from the UK on Tuesday 28 June 2016.

The personally-addressed letters were delivered to the pupils by Captain Rodney Young and RMS Purser Alan Bennett, assisted by Governor Lisa Phillips, at the Post Office, Jamestown (pictured). In her remarks at the event the Governor gave a brief history on the origins of the Postal Service, the delivery service of the RMS, and the importance of the service provided to St Helena by the Island’s Post Office.

This Pen-Pal exchange helped to mark the final voyage of the RMS St Helena from the UK – the last working Royal Mail Ship.

The children eagerly opened up their letters which gave them an insight into the life of a Mount Stuart pupil in Cardiff, UK.