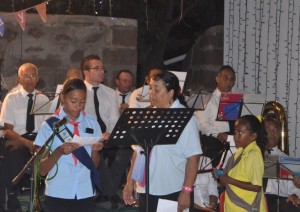 The event held in the Mule Yard, organised by the St Helena Girl Guiding Association in conjunction with Corporate Services, saw a large turnout from Girl Guides, Brownies, Rainbows, parents and members of the public.  Also present on the evening was Acting Governor Sean Burns and Mrs Burns, and Chief Secretary Roy Burke and Mrs Annetts.

The Vice President of the Guide Association, Mrs Ivy S Ellick, gave the Welcome speech and Jamestown Guides opened the event with a prayer, followed by a birthday poem read by the Half Tree Hollow Guides.  Highlights of HM The Queen’s life – as a mother and grandmother, and moments of sadness during her reign – were given by the Longwood Guides. A famous quote was also recited: “I cannot lead you into battle.  I do not give you laws or administer justice but I can do something else – I can give my heart and my devotion to these old Islands and to all the peoples of our brotherhood of nations.” -From Her Majesty’s 1957 Christmas Broadcast. 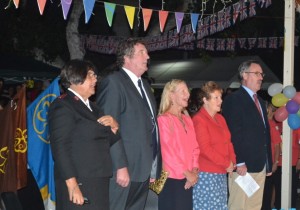 The special gas fuelled Beacon was lit at 7.30pm by the Hon Speaker, Eric Benjamin. It remained alight throughout the rest of the ceremony.

On the lighting of the Beacon the Acting Governor read a message on behalf of His Royal Highness, Prince Charles:

“Beacons are to be lit on mountaintops, on beaches, in farmyards and on church towers, uniting us all in our heartfelt appreciation of The Queen’s lifetime of service to the United Kingdom and other Realms, and to the Commonwealth.

“Since time immemorial, the light of beacons has relayed important messages across the land.  This message we proclaim with the greatest pride and affection.”

This was followed by the singing of the National Anthem and Happy Birthday, accompanied by the Get-togethers Orchestra and Salvation Army Band. 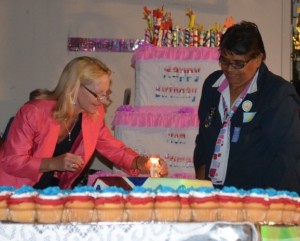 Members of the Girl Guides and Brownies proceeded with the popping of nine balloons – symbolising the nine decades of the Queen’s life. This was followed with the lighting of sparklers and release of party poppers.  Mrs Burns was then invited to light the 90th candle on the Birthday cake.

After hearing a few more highlights of the Queen’s life, Lieutenant Coral Yon, ended the programme with an inspirational reading, passing on her experiences growing up in a household with images of the Queen – a Queen with a devout faith in God and a nation’s devotion towards a strong Queen.  The Vicar General, Venerable Archdeacon Dale Bowers, closed the ceremony with a prayer and Blessing.

“The Girl Guide Association (St Helena Branch), in liaison with Corporate Services, wish to extend sincere thanks and appreciation to all who supported, contributed or donated towards this special event of celebration in honor of Her Majesty the Queen’s 90th Birthday on 21 April 2016.”