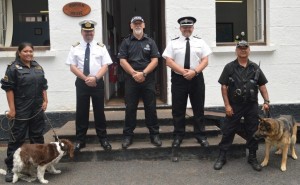 The Police Dog Teams of the St Helena Police Service and Customs have, over the last two weeks, received final training and licencing in their disciplines.

For the Police Service, Special Constable Russell Clingham and Police Dog ‘Tommy’ have been licenced as a general purpose dog with the ability to deal with violent individuals, track and locate persons and articles.

Jessica O’Bey of the Customs team and Detector Dog ‘Millie’ have been licenced to detect numerous varieties of illegal narcotics, plus firearms and ammunition.

“I am very proud of Special Constable Russell Clingham and Police Dog Tommy for what they have achieved over the last two weeks. Russell and Tommy provide great support to their police officer colleagues and they do this to a very high standard. This training is part of the ongoing development of the St Helena Police Service. I must also congratulate Jessica and Millie in achieving the high standards required as a Detector Dog team.  With these dogs, the capability of both law enforcement agencies has been significantly enhanced.”

This training was provided by Sgt Louis Baglietto, an Instructor from the Royal Gibraltar Police with over 30 years dog handling and training experience.  At the conclusion of their training, certificates were presented to Special Constable Russell Clingham and Jessica O’Bey (pictured) by Chief of Police Trevor Botting and Head of Customs, Jon Holland.

“It is with an immense amount of pride and admiration that I today witness the certification of one of my officers – Jessica O’Bey – as our Detector Dog Handler. Jessica has put in a huge amount of effort and determination since commencing her training last year.  She previously underwent many months of mentoring and instruction alongside Paul Laban, prior to reaching this stage.  Louis has given Jessica valuable training to further improve her capabilities as the Island’s Detector Dog Handler for HM Customs & Excise.

“I would also like to pass on my congratulations to Russell Clingham.  I think this has been a wonderful example of joint-agency working and cooperation between St Helena’s law enforcement agencies – which is essential for the security of this Island and the protection of her borders.”