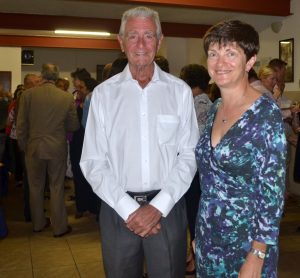 The Governor is pleased to announce the appointment of Judi Leon as the new Head of the Governor’s Office.

Judi arrived on Island yesterday, Tuesday 11 October 2016, and is accompanied by her husband Mike (photo attached). This is a temporary six month appointment as Alan Richmond (see press release of 23 May 2016) was unable to take up the position. Judi replaces Sean Burns who returns to Tristan da Cunha as Administrator at the end of November.

After three years working in immigration at the Home Office, Judi joined the Foreign & Commonwealth Office nearly thirty years ago. During that time she has enjoyed postings to New York, Bangkok, Mumbai, Johannesburg and Singapore, as well as jobs in London. She has worked on a wide range of issues including the UK’s relationship with India and Turkey, the Know How Fund (a DFID project to assist Central and Eastern Europe following the end of the Soviet Union), resources, sustainability and, most recently, trade and investment.

Judi is looking forward to her time on St Helena and to understanding how she can help Saints take advantage of the opportunities to develop themselves and their economy.

Judi and Mike both enjoy walking and learning about historical buildings and nature.