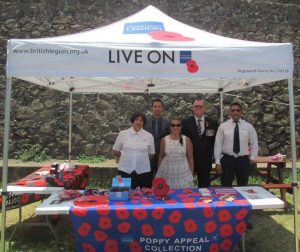 Corporate Support would like to extend sincere thanks to all who supported this year’s fund raising in aid of the Poppy Appeal Fund, and attended the Remembrance Sunday Service on 13 November 2016.

The sum of £2365.26 was raised this year, and will be sent on behalf of St Helena Island, to The Royal British Legion’s Poppy Appeal in the UK.

Special thanks are extended to Mike Durnford for his continued voluntary support to the Poppy Appeal Fund, and to his team of volunteers – DC Louise Scott, Lieutenant Coral Yon, Nicholas and Phyllis Yon of the Salvation Army, Barry Stroud, Councillor Ward Pearce, HE Governor Lisa Phillips, Leaders, and all Guides & Brownies – who assisted in raising public awareness and promoting Remembrance Sunday. Thanks also to the St Helena Fire Service for their assistance with the setting up of the marquee and to Johnny Dillon for the use of the Mule Yard and the PA system.

Sincere thanks to all the voluntary organisations and the wreath layers who participated in this year’s Remembrance Service, and to all who made generous contributions to the Poppy Appeal Fund, including Sure South Atlantic Ltd and the RMS St Helena. Thanks are also extended to all who continue to generously support the Poppy Appeal, including the local shops, Gilbert Young and his team, Connect Saint Helena Ltd, Cecily Bateman, 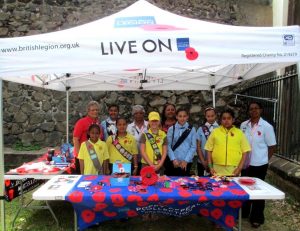 We look forward to your continued support and dedication to the Poppy Appeal Fund and Remembrance Sunday Service in 2017.