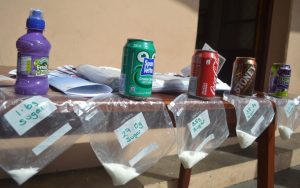 Diabetes Week is an annual event in the Diabetes UK calendar which this year on St Helena runs from 12 June to 18 June 2016 – during which time the Health Promotion Team has organised activities to raise awareness of this disease which is widespread on the Island.

Today, Friday 17 June 2016, staff from the Health Directorate – Nurse Jackie Henry, and Health Promotion Coordinator, Marian Yon – hosted a display in front of the Post Office showing the causes and effects of Type 1 and Type 2 Diabetes. Also available were leaflets on ‘Smoking and Diabetes’, ‘Diabetes and your Heart’ and ‘Looking after your Feet’. Bookmarkers highlighting information on ‘Reducing Your Risk of Diabetes’ were handed out to those who might be worried about developing the disease.

The team also had on display the amount of sugar found in canned drinks. Shockingly, ‘Liqui Fruit’ contained the highest amount of sugar – whilst water, of course, contains no sugar at all.

Members of the public also had the opportunity to have a quick and free diabetic test conducted privately by the Diabetic Nurse.

“The aim of these events is to raise awareness about Diabetes – that is what health promotion is all about. It is much better to know, than to not know at all.

“I would like to thank the Post Office staff for letting us use their premises, especially for the room where we conducted diabetic testing.”

The Health Promotion Team has also visited various SHG departments this week, presenting an introduction on diabetes and testing blood sugar levels with glucometers (for those who wanted to be tested).