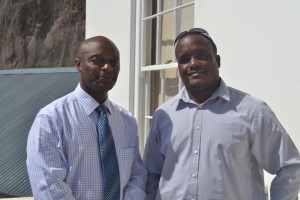 Currently on Island assisting Her Majesty’s Revenue & Customs team, in the implementation of the Automated System for Customs Data (ASYCUDA World), is Mr Owen Holder from Barbados and Mr Ernie Boland from Dominica (photo attached).

Ernie and Owen are on Island for three months assisting the technical and functional teams. While here they will also be:

Both consultants are based at the HM Customs & Revenue Office at the Wharf and will be working closely with the various stakeholders of ASYCUDA World to ensure the delivery of an effective training programme.

ASYCUDA World is a web-based system that sets a platform for e-Government to improve trade facilitation and avoid delays. The improvements ASYCUDA will deliver include faster and more streamlined clearance of goods processes, better accounting and statistical capabilities and a paperless system.

ASYCUDA World used on St Helena is the most up to date version, developed by a dedicated team from the United Nations Conference on Trade and Development (UNCTAD). It can be found in over 100 jurisdictions worldwide.