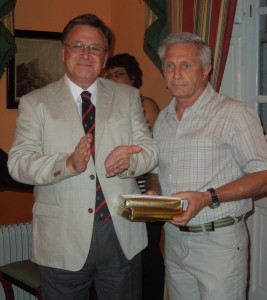 The MOD project to remove oil from the RFA Darkdale wreck in James’ Bay is nearing completion this week.  At a reception held at Plantation House (Wednesday 12 August), Governor Mark Capes expressed his admiration for those who carried out the work on the project.

“I would like to acknowledge the extraordinary work that the team have done. I’m sure it was a dangerous and difficult job.  The amount of oil held within the Darkdale wreck could have resulted in a nightmare scenario – if that oil had leaked out during a storm.”

“They have done fantastic work for St Helena and the Island owes them a debt of gratitude’’.

Although Ministry of Defence Project Director Andy Liddell and Rachel Crawford, Salvage Project Manager, could not be present at the reception due to their ongoing work on the wreck, Governor Capes thanked them and the whole team and presented St Helena plaques as mementos of a remarkable project.

“Firstly, I would like to thank everyone on the Island for their hospitality during the time we have stayed here.

“We have removed around 2000 cubic metres of oil on the wreck and conducted over 200 dives.  The last tank is being pumped at the moment, which consists of aviation fuel – equipment for this work was offloaded from the RMS today.  Hopefully tomorrow, all the oil and fuel will have been removed.

“Over the next few years there will be some slight residual leakage, because we have drilled an awful lot of holes over the wreck.  This has actually changed the wreck’s appearance, so it now offers something unique for divers who visit the area.”