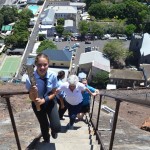 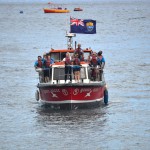 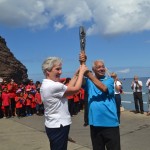 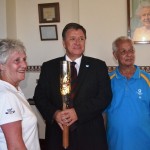 The Commonwealth Queen’s Baton has this morning arrived at St Helena Island, the fortieth stop in its impressive relay around the 70 nations and territories of the Commonwealth.

The Baton stops at the Island en-route from Cape Town to Ascension Island and has already begun a busy schedule of events (organised by the National Amateur Sports Association St Helena (NASAS)) during its two day stay on the Island.

Accompanied by Pam Young, NASAS Secretary, Louise Martin CBE, Hon Secretary of the Glasgow Commonwealth Games Association, Queen’s Baton Relay team member Shona Purves, plus three members of a BBC team and a Queen’s Baton Relay photojournalist, the Baton was brought ashore from the RMS St Helena and received by HE Governor Capes at the Wharf this morning, with schoolchildren and members of the public looking on.

The Baton was then transferred to participants of past Commonwealth and Island Games at the seafront, before the Primary Schools relayed the Baton across the Wharf to Jacob’s Ladder. Prince Andrew School students relayed the Baton up the 699 steps of the Ladder before it was brought back to Jamestown by members of St Helena youth group, New Horizons.

The Queen’s Baton was then officially received in the Governor’s Office and by Members of St Helena Legislative Council.

“The people of St Helena are delighted to be included in the Queen’s Baton Relay and I am sure that the team accompanying the Baton will receive a warm welcome as the Baton tours our Island. And after the pleasant five day journey from Cape Town on the RMS St Helena, I have no doubt that our visitors will be excited to see the beauty of St Helena and to meet as many as Saints as possible.”

The Baton is now making its way around various assembly points on the Island where the community are encouraged to take part in this international event by touching and viewing the Baton.In its journey around St Helena, the Baton will visit all Schools, Longwood House, the Airport site, the Community Care Complex and Sheltered Accommodation, SHAPE, the General Hospital, and Plantation House to visit the Island’s oldest resident, Jonathan the tortoise.

The Baton will leave on the RMS St Helena on Friday 21 February, bound for her next stop at Ascension Island.

This is the third time St Helena Island has participated in the Queen’s Baton Relay celebrations. The first Baton visited the Island in May 2005 and the second in February 2010.

The Queen’s Baton Relay is a much loved tradition of the Commonwealth Games and symbolises the coming together of all Commonwealth nations and territories in preparation for the four-yearly festival of Sport.

The Glasgow 2014 Queen’s Baton Relay is the curtain-raiser to the 20th Commonwealth Games. Over a period of 288 days the Baton will visit 70 nations and territories, cover 190,000 kilometres and involve a third of the world’s population, making it the world’s most engaging relay.The finish line is in the host nation Scotland just in time for the Glasgow 2014 Commonwealth Games Opening Ceremony in Glasgow on 23 July 2014, where Her Majesty The Queen will read aloud Her Message to the Commonwealth.