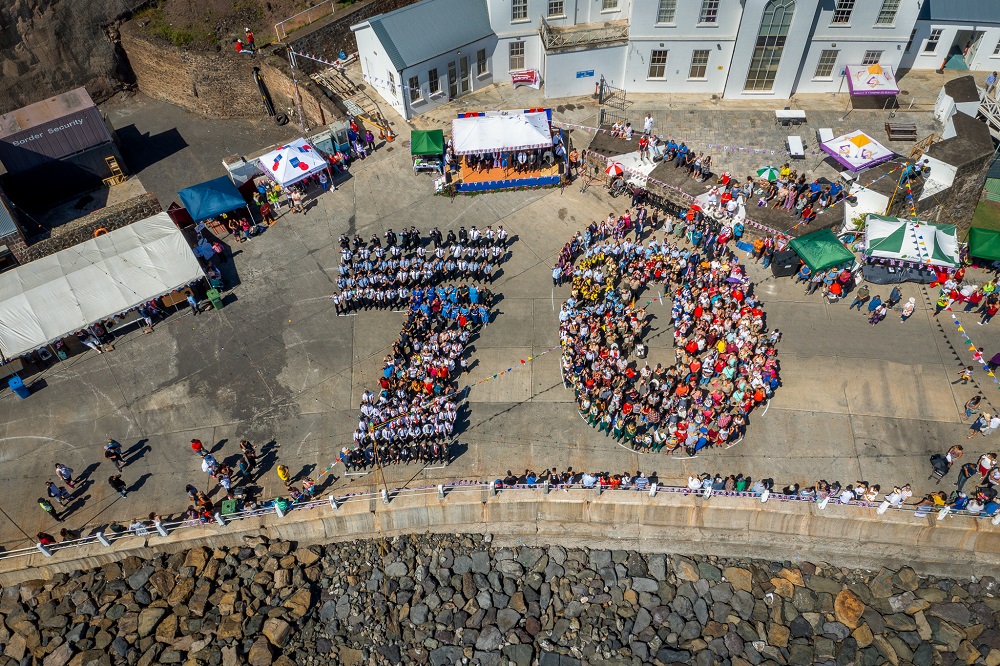 A Service of Thanksgiving was held at the seafront on Friday 3, June 2022, to celebrate the Platinum Jubilee of Her Majesty The Queen.

The event began with a formal parade involving all uniformed contingents.  The parade started from the Castle Gardens and was led by the Public Service uniformed services which included the Police, Fire Service, Airport Fire Service, Sea Rescue, Medical staff and Prison Officers.  Others taking part in the parade included the Scouts, Girl Guides, Pathfinders and Church Brigade.

The Thanksgiving Service involved a number of religious denominations and included bible readings, prayers and congregational hymns to honour Her Majesty The Queen becoming the first British Monarch to celebrate a Platinum Jubilee.

“Numerous activities and initiatives have, and will, take place throughout the year around the world to mark this special year for Her Majesty.  However, it is this extended bank holiday weekend in June when many events will culminate.

St Helena is included in the Platinum Jubilee Cook Book published last week and supported by FCDO. It includes recipes for the Island’s signature coconut fingers, as well as pumpkin pudding and St Helena fudge. Our thanks to Moira, Ettie and Debbie at Plantation House for preparing an outstanding contribution to the book.

“At Plantation House, a silky oak from the ENRD Nursery at Scotland and a variety of six fruit trees from James Herne will be planted. One tree for each decade of the Queen’s reign. They will become a permanent marker of this moment in history.”

The Governor also made a further announcement from Her Majesty specifically for St Helena; that at the time of the Platinum Jubilee, and to mark the dedicated and professional service provided by the St Helena Police, Her Majesty conferred upon them her royal recognition, and they will now be known as the Royal St Helena Police Service.

The Thanksgiving Service ended with the presentation of commemorative Jubilee medals, awarded to personnel who work in the emergency front line service.

To mark Her Majesty’s seventy years of service, uniformed contingents and members of the public formed a figure of ‘70’ (seventy) at the seafront for an aerial photograph.

The day was followed by fete celebrations, which included novelty sports, an African dance display, hat and crown parade, cutting and sharing of the Jubilee Cake which was kindly sponsored by Solomon’s Bakery, quiz & bingo, live music and a firework display.

The SHG Jubilee Working Group would like to extend their thanks to all who assisted with preparations before and on the day for making the event both enjoyable and memorable.