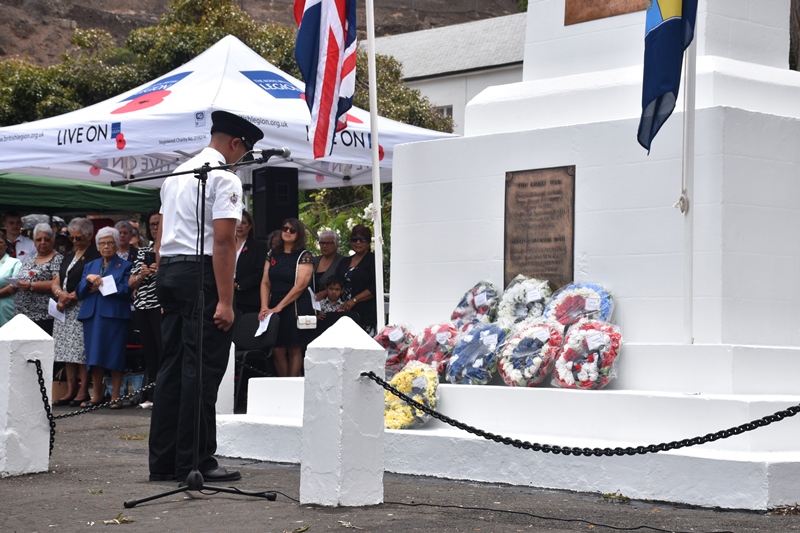 The annual Remembrance Sunday Divine Service, in honour of those who lost their lives in the violence of war, as well as those who had served or survived these wars, was held at the Cenotaph in Jamestown on Sunday, 14 November 2021.

His Excellency, Governor Dr Philip Rushbrook and Mrs Rushbrook attended. The Right Reverend Lord Bishop of St Helena, Dale Bowers, welcomed the many in attendance to the service and invited all to join in prayer. Following prayers the Governor and President of the Prince Andrew School Student Council, Amy Thomas, then gave the act of Remembrance before a two-minute silence was observed, signalled by the Last Post played by members of the First Jamestown Scout Group.

Shortly after, those present sung the Hymn ‘The Lord is my Shepherd’ before the Governor laid a wreath for the Territory onto the Cenotaph. Wreaths were also laid for The President of the French Re-public, The Government of St Helena, The Royal Navy, The Army, The Royal Air Force, The Merchant Navy, The St Helena Police Force, The St Helena Fire and Sea Rescue Services and The St Helena Veterans Association. Members of the public and school children also laid wreaths.

The Kohima Epitaph was said by Governor Rushbrook:
“When you go home – tell them of us and say, for your tomorrow, we gave our today.”

The service then continued with the Act of Commitment being made and acts of peace being offered amongst those present. The National Anthem was sung and the service was concluded with a Blessing from Bishop Dale.

The Island’s servicemen and women then proceeded with the March-Past parade outside the Court House.

Photos of the service held on-Island are on page two of this release.