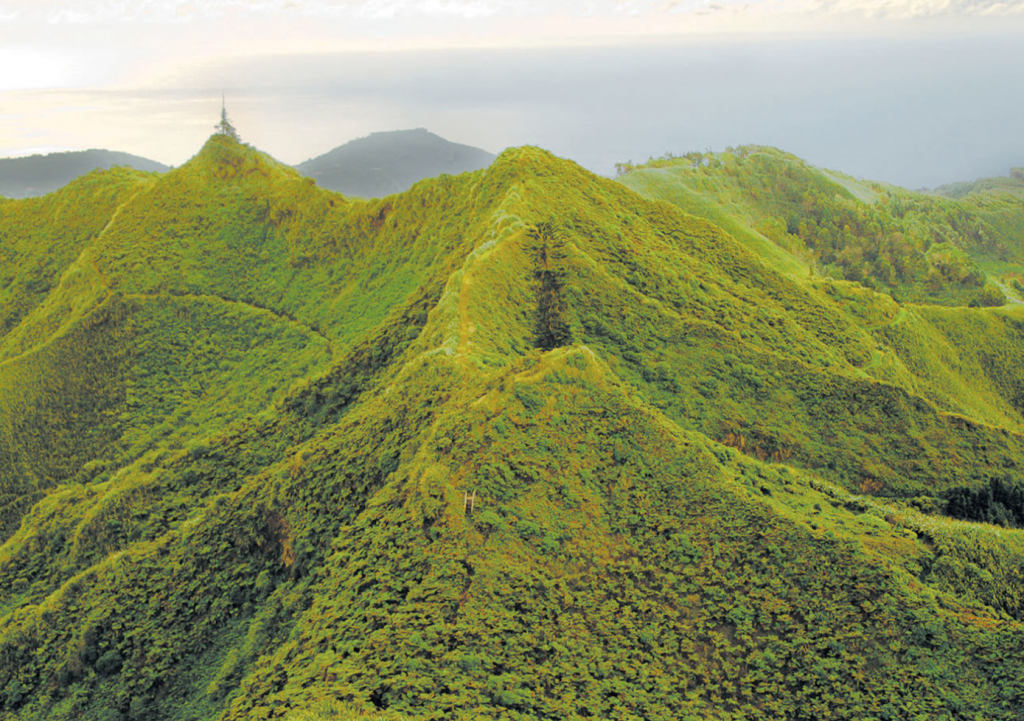 In conservation, we’ve learnt that it is only through continuous learning, continuity of effort, and timely intervention that builds on the experiences and knowledge gained by people over time, that progress can be made and sustained.

The work to save and restore the fragile cloud forest habitat on the Peaks is a good example of this. Work has been ongoing since 1995, after it was highlighted that the cabbage trees and tree ferns were disappearing. Back in 1995, the concern was the uncontrolled spread of flax. Today, the threat from invasive species is much greater, with over 23 species of invasive plants requiring control. In this time, other invasive non-native species threats have also increased including rats, mice, rabbits, myna birds, European wasps, mites, mealy bugs, and Scobius and Fuller’s rose weevils.

Conservation on the Peaks has had to adapt to the changing threats and conditions. Lessons learnt, from successes and failures, help us to build more robust approaches resulting in our weed control and ecological restoration techniques being continually refined and developed.

Invasive species threaten the future of the cloud forest and the security of our water resources – around 40% of our water comes from the Peaks. Unless we find a way to upscale the restoration work there is a real chance that we will lose the battle and more endemic species will become extinct. The current Darwin Plus (DPLUS099) funded project has provided funding to employ six extra staff to reduce the imminent threat of loss of the last remaining wild dogwood, whitewood and black cabbage trees and the plants and animals that depend on them.

Over 115 individual sites, or fragments, were identified under the earlier Darwin funded (DPLUS029) “Securing St Helena’s rare cloud forest trees and associated invertebrates” project which contained one or more ancient cabbage trees. These fragments are critical to the restoration of the Peaks because they contain an essential pool of the genetic diversity of the species, necessary to maximise the genetic diversity of future plantings, giving them the best chance of having some resilience and ability to adapt to change. As ancient remnants, these wild cabbage trees also support a rich biodiversity of associated endemic plant and animal species, acting as reservoirs, from which these unique species can expand out from, populating new areas as new suitable habitat is created.

Under the current programme, work is being conducted across prioritised areas to control weeds, reinforce with plantings of endemics grown in the nursery, and to connect some of the fragments through ‘corridors’ through which species can ‘move’ – physically in the case of an invertebrate, or via pollen or seed movement for plants.

The Peaks teams however need to know much more than the various protocols for controlling weeds in order to work safely and effectively in their jobs and to sustain the benefits of their efforts. To grow and retain skills, training and application of new knowledge is needed and this is just what has been happening over the last few months at the Environmental Management Division (EMD):

Safe working practise with ropes – many of the sites that both the DPLUS project team and the core EMD Peaks and Species Teams work on are steep, unstable slopes, and cliff sites. Six staff from the Peaks Team and two from the Species Team have been undertaking training with St Helena’s Fire and Rescue Service Brigade Manager, Alan Thomas, supported by Watch Manager, Jason Lawrence, and Firefighter, Daniel Yon.

Safe use of pesticides – while chemicals are not used generally to control invasive plants or pests on the Peaks, there are some cases when they are needed (e.g. in the nursery to control pest infestations or to apply directly to the cut stump of a quinine tree). In the nursery we prefer to use organic treatments for control, but even these need to be used safely. The training was delivered by James Fantom and covered the theory of environmental vegetation management, herbicide selection and calculations, herbicide safety, and knapsack spraying.

GPS training – the cloud forest habitat might not be very big (16ha) in area, but it is very difficult to navigate because of the steeply incised ridges, deep gulleys and valleys, and the density, height, and rate of re-growth of vegetation. Therefore, finding suitable working sites and recording where species is found is an important skill to have. This course was delivered by GIS Manager, Devlin Yon, and covered how to setup a handheld GPS, how to pick up waypoints and define them, and plotting new points.

Team working – we recognise just how important team work and good working relations are to achieving positive progress and maintaining the health and wellbeing of the teams, particularly given the remote, and sometimes challenging, working environment. A presentation on inclusion and diversity was delivered by Senior Human Resource Officer (Learning and Development), Jackie Moyce, and Human Resources Business Partner, Bronwen Yon.

NVQ Level 2 Diploma in Environmental Conservation – this is a work-based qualification and two members of staff have registered as candidates with City and Guilds.

Staff also attended a training session on how to use the control method on the wasp and the big-headed ant – this was run by the National Trust Invertebrate Team.

This formal training is also being supplemented with on-the-job training covering a range of activities and protocols including seed collecting protocol and nursery scheduling and production, both of which are important to ensure that the conservation work protects the genetic integrity and diversity of all species. Further training is planned in the coming months in the use of drones for surveying and monitoring, invertebrate ecology, and surveying and plant surveying.

A huge thank you to all the trainers and well done to all staff for your commitment to your professional development for work and congratulations on your achievements.

The DPLUS project is being managed by Nursery Officer, Vanessa Thomas-Williams, supported by Coordinator of the St Helena Research Institute, Rebecca Cairns-Wicks.