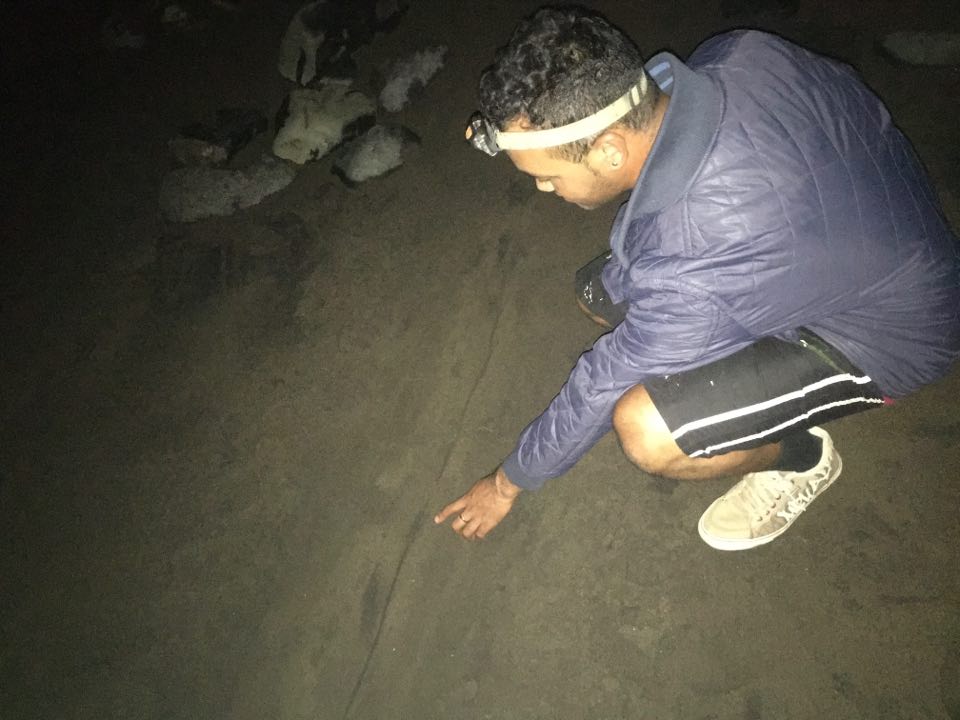 On the evening of Sunday, 5 April 2020, the Saint Helena National Trust’s Marine Team responded to a call regarding a green turtle attempting to nest on Rupert’s Beach. It has been a few years since the last nesting attempt of the green turtle, which happened at Sandy Bay Beach in March 2015. It was also noticed by the Marine team, that during this year’s Whale Shark monitoring season, there has been numerous sightings of mating ‘Greens’ around the Island.

When the Team arrived at the beach, they found that the turtle had already returned back to sea. On searching the nesting attempt, the Team noticed that the turtle had in fact, started to dig her nesting chamber. While this was still exciting to witness, the team was not certain on what made her attempt unsuccessful. Due to Rupert’s being a place of growing infrastructure, a popular recreational area and having a very small and pebbled beach, many factors could have played a part in the failed nesting attempt.

On Monday evening, the team returned to check if any further attempts of nesting would occur. This time, two females made their way onto the beach at Rupert’s, both again were sadly unsuccessful, with the pair finding it difficult to dig between the scattered rocks and boulders. The Marine Team will continue to monitor the beach during this week and have plans in place if a successful nesting attempt is made. Sandy Bay Beach will also be monitored.

“Firstly, we would like to thank the member of public that called us to inform of the first nesting attempt on Sunday. This is a very exciting time for this Island. These prehistoric, gentle, yet endangered animals are returning back to the place where they were born to carry on their life cycle. While it is more known for ‘Greens’ to nest on Ascension Island, the second largest green turtle rookery in the world, many factors are in play for why these females are trying to nest on our beaches here on St Helena. Are they lost on their way to Ascension? Or is it indeed St Helena? Turtles use to nest here many, many years ago, with local ecological knowledge telling us that regular nesting took place right up to the 70’s, when our beaches were more ‘turtle friendly’. Because green turtles become sexually mature at 25 – 40 years, a lot has changed since then for these animals; our beaches have declined in sand and size, infrastructure is in place and sea defences have been built – things a mature turtle as a hatchling then, would not remember seeing at that time, all these factors could have contributed to the decline of the ‘St Helena nesting turtle population’. Still, these recent turtle activities are very exciting.”

In light of these recent sightings, the Team is mindful that members of the public and families will be eager to see such a spectacle. However, the Marine Team would kindly like to remind the public of the following key guidelines to ensure that if you do see this wonderful natural event that these turtles are respected and able to continue their life cycle for generations to come:

If anyone sees a turtle making a nesting attempt either at Rupert’s Beach and/or Sandy Bay Beach, or sees tracks in the sand; please be mindful of the above advice, try to keep your distance and please do not hesitate to contact the Saint Helena National Trust Marine Team immediately on tel: 22569 or 23957.