This sixth Statistical Bulletin of 2018 releases new estimates of incomes from employment for the 2015/16 and 2016/17 financial years, together with small revisions to estimates for previous years. The statistics presented are derived from records maintained by the Income Tax Office, and are derived using methodology consistent with previously published estimates for 2011/12 to 2014/15. The data released in this Bulletin can be downloaded from the St Helena Statistics website at: www.sainthelena.gov.sh/statistics-data. A PDF version of this Bulletin is available here.

The average annual gross income from full-time employment on St Helena, measured using the median of those receiving income above an analysis cut-off and excluding Technical Cooperation Officers, rose in both the 2015/16 and 2016/17 financial years, to £7,640 and £8,230 respectively. The median is the income level at which half of those above it earn more, and half earn less. So for 2015/16 half of gross employment incomes were less than £7,640, and half were higher, and in 2016/17, half were lower than £8,230 and half were higher.
The median income for 2016/17 was 7.7% higher than 2015/16, and the 2015/16 median was 4.5% higher than the previous year. However, these estimates are not adjusted for the impact of price inflation. When this is taken into account, the estimated ‘real’ annual growth in incomes from employment was 3.4% for 2016/17 and 3.1% for 2015/16.
Note that the median is a common measure when estimating average incomes, since the usual alternative – the mean – is too sensitive to small numbers of large incomes. However, the mean is given in Chart 1 and Table 1 for comparison. 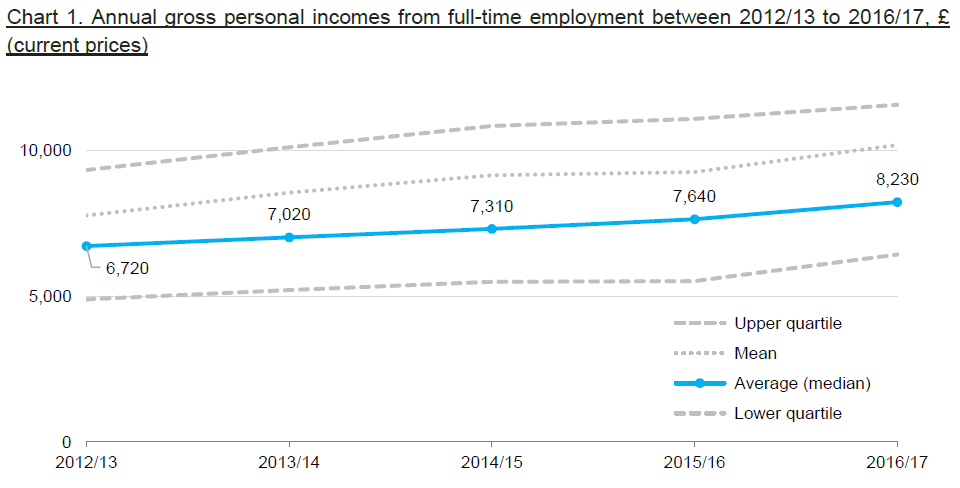 As in previous statistical releases on income, these estimates measure gross (before income tax) incomes of the persons in full-time regular employment on St Helena above an analysis threshold. They exclude company and self-employment incomes, incomes of Technical Cooperation Officers, and investment income. The analysis threshold is set at a level around the single-person rate of the Minimum Income Standard (a measure of poverty) for the previous year. Using this threshold helps eliminate part-time incomes and income derived purely from benefits, and incomes that are under reported. Unless otherwise stated, all estimates of personal incomes in this bulletin use these thresholds (see Table 1 for thresholds used each year). All annual estimates are rounded to the nearest 10.

Distribution of incomes from employment 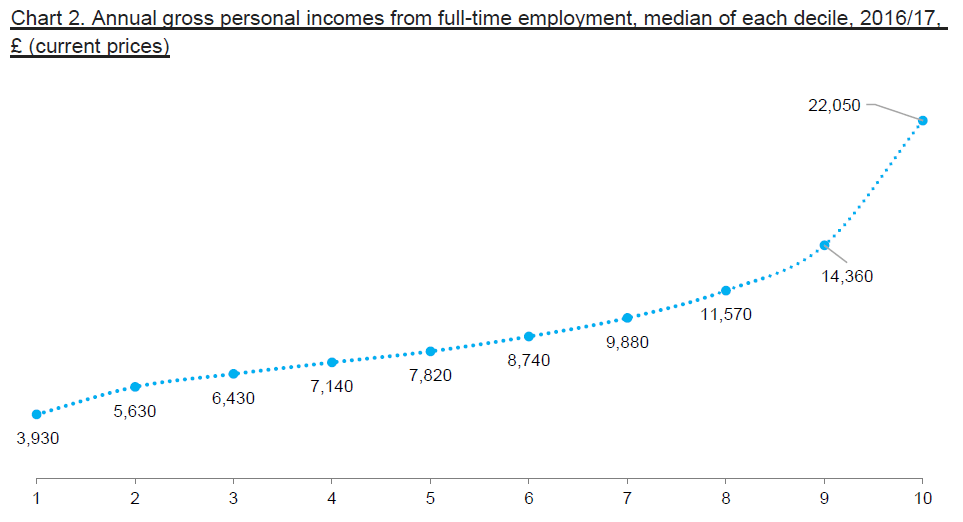 Differences in average incomes between men and women

The average annual personal incomes of both men and women in full-time employment increased between 2012/13 and 2016/17. But the median income from employment of men was consistently higher than that of women, and around 15% higher for the years 2013/14 to 2016/17 (Chart 3).

The minimum wage and the income tax threshold 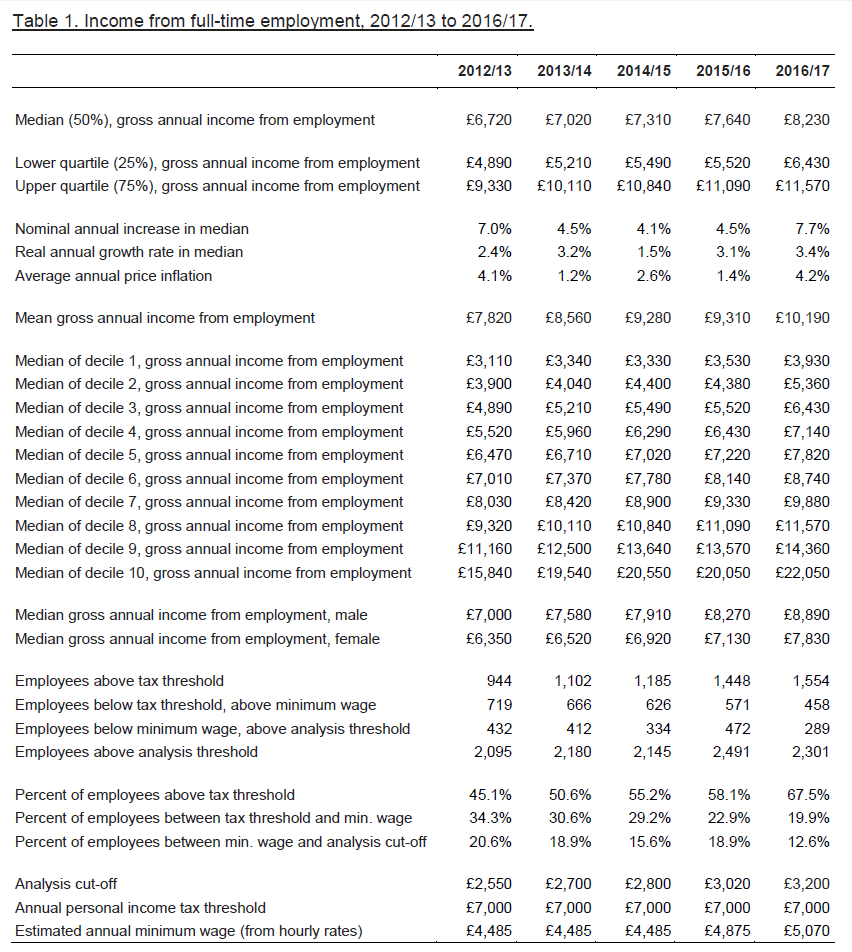 Data source – Statistics on incomes on St Helena are derived from a computerised income tax database maintained by the Income Tax Office. This captures information about all income-earners whose details are submitted through the Pay-As-You-Earn (PAYE) system and through individual and corporate tax returns. There are some limitations when using this database as a source for estimating incomes; for example, informal income earned may not be declared, and it is difficult to distinguish full-time and part-time workers, for example.

Gross income from employment – The primary analysis in this Bulletin uses average gross incomes from full-time employment, which is primarily based on data submitted through the PAYE system. Income from investments and from self-employment is excluded. Incomes are gross, i.e. before any tax is deducted, and all estimates are rounded to the nearest 10.

Median – The median is a measure of the average value of a set of numbers; it is the ‘middle number’ in a ranked list of numbers. It is the value at which exactly half the population has a smaller value and half has a higher value. It is preferred to the mean when estimating average incomes, since the mean is more easily ‘skewed’ by individuals with relatively large incomes.

Mean – The mean is a measure of the average value of a set of numbers; it is derived by adding all the numbers together, and dividing by the number of values in the dataset. While it is the most common measure of the average for many applications, it can produce misleading results for estimating average incomes because it can be biased by small numbers of relatively high incomes.

Analysis threshold – Statistics on average gross incomes use a lower bound threshold to ensure that part-time or under-reported incomes, and incomes derived entirely from social benefits rather than employment, are excluded from the analysis as far as possible. The threshold is set slightly above the Minimum Income Standard level, a measure of poverty.

Technical Cooperation Officers – Technical Cooperation Officers are persons employed by the Government of St Helena following international recruitment. They are employed for a fixed period of time on different pay scales and terms and conditions than those recruited locally on St Helena. As such, their incomes are not considered typical and so are excluded from the main statistics on incomes.