This fourth bulletin of 2018 covers the release of the new estimates of inflation rates and the Retail Price Index (RPI) for the first quarter. The data released in this Bulletin, including the RPI, itself, can be downloaded from the St Helena Statistics website at: www.sainthelena.gov.sh/statistics-data. A PDF version of this Bulletin is available here.

Categories with the lowest inflation are ‘Fuel and Light’ and ‘Services’ at 0.2% and 0.9% respectively. Apart from small fluctuations in the price of gas cylinders, prices of items in this category have seen very little change; 80% of the category is electricity, whose price has not changed since Quarter 1 2016 (petrol and diesel is included in the ‘Transport’ category). The ‘Services’ category includes medical and telecommunications fees and charges; some telecommunications fees have decreased, and any impact on the RPI of the increase in medical fees announced at the beginning of April will be captured in the second quarter. 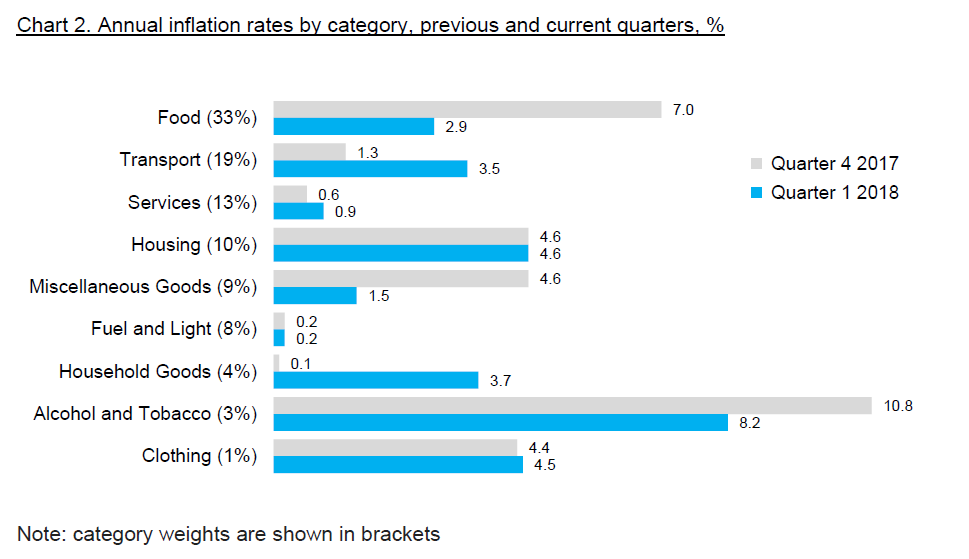 Chart 3 shows the values of the Retail Price Index, together with selected categories, rather than annual inflation rates. This is useful to illustrate price changes since 2010, rather than just the past year. The price of ‘Fuel and Light’, for example, has increased much faster than ‘All Items’ since 2010, even though the current annual inflation rate for this category is quite low. On the other hand, price rises of ‘Services’ have been lower than the overall rate.

Prices for the quarterly RPI calculation are collected from retailers in the last month of the quarter, in this case the second and third weeks of March. This was just after the introduction of a new shipping tariff and the first call of the new MV Helena shipping service. The timing of this new service and the timing of the RPI price collection mean that any changes to prices made by retailers as a result of the change in freight rates may not have been fully captured. In fact, many of the prices collected were unchanged from the price collection in December 2017, although there were some increases to the price of some larger items, such as household appliances and new vehicles. These increases are reflected in the inflation rates for transport and household goods, which both went up. Any further price changes that occur as a result of the new shipping tariff should be captured in the price collection exercise for the Q2 2018 RPI in June.

St Helena imports most of its goods from either South Africa or the UK, and so changes in the prices in these countries, as well as exchange rates between the South African Rand and the St Helenian Pound, are often reflected in changes in prices of items on the shelves on the Island.

Between Quarter 1 2018 and the same quarter in 2017, the UK Pound (and hence the St Helena Pound) strengthened slightly against the Rand. In Q1 2017, a St Helena pound was worth 16.37 Rands on average, but this increased by 1.7% to 16.65 Rands on average in Q1 2018. The UK Pound also regained significant ground against the US Dollar, increasing in value about 12% from Q1 2017 and regaining most of its per-Brexit level. This may have also added to the downward pressure on the St Helena inflation rate, since any goods and commodities whose prices are set in dollars may become slightly cheaper.

The Statistics Office is currently in the process of ‘rebasing’ the RPI, using the data collected from the Household Expenditure Survey in November. This involves calculating new expenditure patterns to update the current basket, for example adding items which are relevant now (e.g. mobile telephones) and deleting any that are no longer purchased. The next inflation rate calculation for Quarter 2 2018 is expected to use this new ‘shopping basket’. The Statistics Office would like to thank all those that took part in the 2017 survey, which helps make sure that this important exercise is accurate.

What is the Retail Price Index (RPI)?

The RPI is the official measure of the average change in the retail prices of goods and services. It is estimated each quarter, or once every three months. Changes in the RPI measure retail price inflation, and are usually computed on an annual basis; that is, comparing price changes over a twelve month period. For detailed tables of the RPI, please visit www.sainthelena.gov.sh/statistics-data.

Inflation simply means that something is growing or increasing, but when used in the context of the economy it usually refers to the change in average prices of goods and services over time. On St Helena, the primary measure of inflation is the RPI, and it is usually quoted as an annual estimate: it is the amount by which the RPI has grown over the preceding twelve months. A decrease in the RPI is also possible, though unusual – over a twelve month period, a drop in the RPI would result in retail price deflation (i.e. a negative inflation rate).

Why do we measure the RPI?

The rate of change of retail prices is an important indicator of economic performance and is used by Government, businesses and society in general. It enables an understanding of the impact of price changes on households and individuals, including for specific groups of goods and services.

How is the RPI constructed?

The basis for the RPI is the average cost of goods and services purchased by households on St Helena, or a weekly ‘shopping basket’. Items which households purchase more of, such as food, have a bigger share, or weight, in the RPI basket (the full specification of the RPI basket is available from the Statistics Office website). The current RPI uses a basket from the last Household Expenditure Survey in 2009, and baseline prices for that basket were recorded in the second quarter of 2010. Prices have been collected every quarter since then, to calculate the latest price of the average shopping basket. By convention, the value of the basket in the baseline period is scaled to 100, and the RPI values are quoted in relation to that baseline. Thus, an RPI value of 120 means that average prices have increased by 20 per cent compared to those recorded in the base period.

What happens when an item is not available?

If a particular item is not available during a round of price checks, a series of prescribed steps are followed to ensure the RPI measurement is not distorted. An important principle is that price changes should reflect actual price increases, and not changes in the quality of items. If an item is not available then either the previous price will be carried forward from the previous quarter, or a suitable substitute item will be identified and an adjustment calculation made. Great care is taken to ensure that this substitution is similar to the original item, that it represents the item category, and that it does not introduce error to the measurement of the RPI.