The main farewell celebrations for the RMS St Helena took place at the Seafront on Friday, 9 February 2018 – the day having been declared a public holiday by Governor Lisa Phillips.

A large crowd turned out to celebrate 27 years’ service of the RMS St Helena with many taking advantage of the limited free tickets to attend the RMS Open Day and visit the ship for the last time. 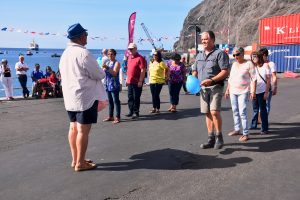 At the Seafront, many stalls were set up by local businesses selling RMS-related goods and souvenirs. The RMS St Helena also had their own stall selling RMS merchandise. The popular Shirley’s Ice Cream van kept children, and adults, cool with a range of sweet treats while a food bus provided eats. Amphibians was also on-hand, providing drinks from the bar and hot food.

Throughout the day, the crowd was kept entertained with live music from Route 66 whilst novelty sports, including the famous RMS Frog Racing, took place in front of the main stage. 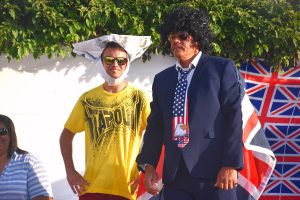 At 6pm, prizes were presented for the Fancy Hat and RMS Memories Competitions. Scott George picked up first prize for his ship-themed hat made of newspaper. Children who won prizes in the respective RMS Memories categories were individually called on stage to receive their certificates and prizes from Governor Lisa and Captain Adam Williams. The presentation was followed by the unveiling of an impressive RMS cake, made by local baker, Steve Yon. The cake was later shared out amongst the public.

Speeches were then given by the Governor, Captain Williams, and Director of St Helena Line, Kedell Worboys MBE.

The highlight of the performances came from the RMS Amateur Dramatics Society who performed ‘The Final Act of Stupidity’ much to the delight of everyone present.

The night was rounded off with a fireworks display which wowed the crowd followed by the releasing of many Chinese lanterns which lit the night sky above the RMS St Helena.