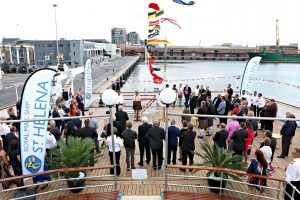 To mark this occasion, a number of celebratory events took place in Cape Town, starting on Tuesday evening with a reception onboard the ship hosted by Captain Adam Williams and Directors of St Helena Line, Mrs Kedell Worboys MBE, and Mr John Marden. Guests included representatives from companies who have been involved with the RMS over the years – Cape Town Port Authorities, RNC Ships Agency, Dormac Marine & Engineering, AWSML, Lloyds Register, Seamen’s Mission, AirSeaMed and P&I Club.  Other invitees included those with close links to the Island – representatives from Mantis St Helena, the Tristanian community and the British and French Consulates. 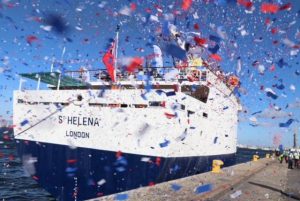 The Associated Press and the editor of Maritime SA, Cape Times were also in attendance.

Passengers embarking the RMS on Wednesday, 24 January, were treated to musical entertainment by local musicians. A reception in the passenger terminal followed and invited guests and members of the public wishing to see the final sailing of the RMS were allowed quayside from 5pm.

The 27ft ‘paying off’ pennant, to mark the 27 years’ service of the RMS St Helena, was carried by a number of RMS Officers and crew, who signed off this call in Cape Town, and was received by a contingent of ship’s crew on the dockside before being presented to Captain Williams by Director of St Helena Line, Kedell Worboys MBE. The pennant was flown from the RMS main mast as she set sail from ‘F Berth’ amidst a cloud of confetti and to the sounds of the Cape Town Caledonian Pipe Band. 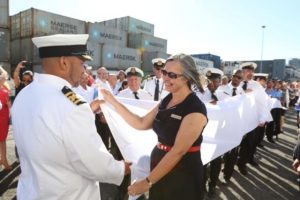 The farewell was covered by the South African Broadcasting Corporation and the BBC.

A programme of events to mark the RMS Farewell on St Helena has this week been published in local newspapers.

The programme starts on Tuesday, 6 February, with a Thanksgiving Service at St James’ Church. The service starts at 7pm and all are invited to attend. Following the service the RMS crew will proceed to the Seafront for a Blessing.

Friday, 9 February, has been declared a Public Holiday by Governor Lisa Phillips for the main RMS Farewell celebrations.

The RMS Open Day will take place between 9am-4.30pm for those who have already made a booking. Celebrations on the Seafront will start at 3pm and will include a local market, RMS entertainment, an exciting performance by the RMS Amateur Dramatics Society and live music by various local bands. Festivities will continue until midnight.

The RMS will depart St Helena on her final voyage from the Island on Saturday, 10 February.  At 9am on this day current RMS crew members in their respective uniforms will parade from the Canister in Jamestown through to and along the Seafront before returning to the ship. They will be accompanied by the Scouts band and uniformed contingents.

At 2.15pm, the 27ft paying off pennant will be walked from the Customs Building to the lower wharf steps by competition winners. Kedell will present the pennant to Captain Williams. Members of the public will be allowed access to the lower wharf to witness this and to say a final farewell.

It is planned for a flotilla of boats to circle the harbour and the RMS St Helena before she pulls up anchor. Captain Williams will sail at 4pm towards Buttermilk Point before turning around for a steam past the harbour, allowing all ashore to view the RMS for one last time decked out in full dress and to view the 27ft paying off pennant. The RMS will then stop at Lemon Valley where her flags will be taken down before continuing her onward journey to Cape Town.

Please see this week’s newspapers for an outline programme of events. Further details will follow over the coming weeks.

An overwhelming response was received for the RMS Open Day. Thank you to everyone who contacted the Tourist Office to book a space.

Unfortunately due to the high level of interest, no further bookings can be taken.