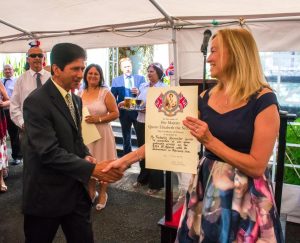 At the Garden Party to mark the birthday of HM Queen Elizabeth II, held at Plantation House on Saturday, 9 June 2018, Her Excellency Governor Lisa Honan awarded Certificates and Badges of Honour to persons for their loyal and valuable services that have provided exceptional benefit to the people of St Helena.

In HE’s speech before the presentation, Governor Lisa said:

“We cannot forget that since the last Queen’s Birthday Party we have said a sad farewell to the RMS St Helena. Much has been said and written about the RMS, which I won’t repeat. But what I would like to do today is recognise the people who provided long and valuable service to her and, by extension to the Island.” 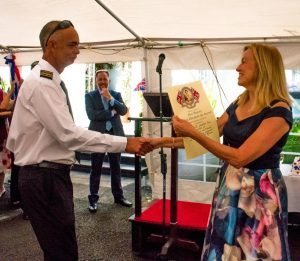 David Yon received a Certificate & Badge of Honour for long service (37 years) and outstanding achievement on the RMS.

Certificates and Badges of Honour in recognition of 20+ years’ service on the RMS were presented to Chedric Jonas, Patrick Peters, Patricia Reynolds and Daniel Stroud.

Frederick Green was presented with a Certificate for 20+ years’ continuous service on the RMS until the ship was decommissioned in February 2018 and Patrick Williams and Donald Bowers received Certificates in recognition of 20+ years’ service on the RMS. These crew members had previously been awarded the Badge of Honour in April 2007 for serving on the old RMS St Helena during the 1982 Falklands War. 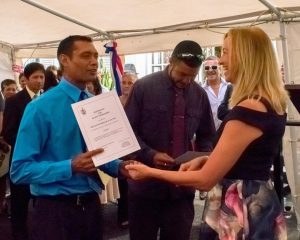 A Certificate and Badge of Honour in recognition of loyal and valuable services in the nursing profession was also presented to Wendy Herne.

Although recipients have been awarded a Certificate and Badge of Honour, they were only presented with their Certificates at the Garden Party as the Badges are yet to arrive on Island. Badges of Honour will be presented to recipients at a later date.

Acts of Bravery Awards were presented to Wayne Yon and Ricardo Williams for performing an act of bravery on 12 July 2016 by putting their own lives at peril in attempt to rescue a friend and fellow fisherman whilst the MFV Amalia was on an offshore fishing trip.

Dean Gonsalves, Craig Scipio and Paul Scipio were awarded a bronze medal and Act of Bravery Certificate from The Royal Humane Society – a British charity which recognises those who have contributed to the saving of life – for performing an act of bravery by being instrumental in the sea rescue of a victim who had been attacked by a shark whilst swimming in English Bay, Ascension Island on 21 April 2017.