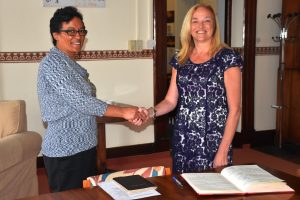 Gillian took the prescribed oaths in the Governor’s Office and will begin her role immediately following the departure of Chief Secretary Roy Burke on overseas leave. Roy is due to return on 1 October 2017.

“My thanks to Gilly for Acting as Chief Secretary. She has already done a great job preparing for and participating in the first ExCo meeting in which we agreed new ways of working with the public and improved transparency.”