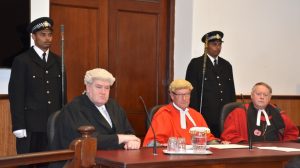 The formal opening of the Supreme Court of St Helena took place this morning, Wednesday 16 November 2016, at 10am (photo attached). The court list consists of two family cases, five criminal cases, three matrimonial matters and one judicial review case.  The Supreme Court will be in session until Tuesday 20 December 2016.

His Lordship, the Chief Justice, Charles Ekins Esq, entered the Courthouse accompanied by the Chief Magistrate, John MacRitchie and the Bishop of St Helena, Dr Richard Fenwick. Lawyers, Justices of the Peace, officials, and members of the public were also in attendance.

The Attorney General took the opportunity to praise legal practitioners, including Aine Hurley, Crown Prosecutor, who recently returned from Turks and Caicos where she represented St Helena Chambers at the conference of Attorneys General. He also mentioned Nikita Crowie, Legal Executive, who has been accepted to start a Bachelor of Laws with the University of London through distance education; Lydia Buchanan who recently joined Chambers as Administrative Assistant, and also Personal Assistant Cilla Isaac who has been an ongoing support to Chambers for many years.

“Since the last sitting of the Supreme Court in March, a number of Bills have been enacted. I wish to highlight the Welfare of Children (Amendment) Bill that has extended parental responsibility to unmarried fathers. This was needed as the 2016 Census data shows that between 2011 and 2016, 77 per cent of births on St Helena were to unmarried mothers. The law now protects the relationship of the fathers with their offspring regardless of the status of the parents’ relationship.”

The Attorney General mentioned the Bills that the Legislative Council will consider at the next formal session on Friday 9 December 2016, amongst which is the Marriage Bill. If the Councillors vote for the Marriage Bill, it will put St Helena in the list of enlightened nations that allow civil marriage to their citizens without discrimination on grounds of sexual orientation.

The Attorney General also told the courts about the Chambers’ newsletter Rara Avis and their new motto, ‘Fidelitas, Servitium et Integritas’ – meaning Faithfulness, Service & Integrity – and which summarises the commitment of the AG’s Chambers to the work they do.

In his address, the Chief Justice made reference to our new Governor Lisa Phillips. He also echoed the Attorney General in wishing Nikita all the best in her studies with the University of London.