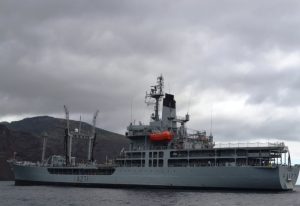 The Royal Fleet Auxiliary (RFA) ‘Gold Rover’ (photo attached) will arrive at St Helena on Friday 20 May 2016, in time for the St Helena’s day celebrations on that day. Her crew will then be fortunate enough to spend 10 days at anchor in James’ Bay, allowing them to explore the Island and enjoy the night life.  But sadly, this will be the ship’s final scheduled visit to St Helena.

RFA Gold Rover has been to St Helena many times before, and on the previous visit her crew helped the Islanders commemorate the arrival of Napoleon two hundred years earlier, reinforcing the positive relationship between the Royal Navy, the Royal Fleet Auxiliary and the inhabitants of St Helena.

After her last departure from St Helena, she took part in Exercise NEMO, which was designed to improve cooperation between European and African nations.  The exercise involved several boarding exercises on Gold Rover by African patrol boat boarding teams, and multiple Replenishments At Sea (RAS) serials with the French Warship FS Mistral.

RFA Gold Rover is a small fleet tanker of the Royal Fleet Auxiliary and is one of five Rover-class ships that were designed by the Admiralty, all of which were built at the Swan Hunter shipyard.  Today, Gold Rover and her sister ship Black Rover, are the last two in service with the RFA on duty around the world.  The others have all been phased out as part of a worldwide effort to replace single-hulled tankers with more environmentally safe double-hulled vessels.  Gold Rover will return to the UK next year when she will be decommissioned. Currently deployed to the South Atlantic as a ‘Singleton’ unit, RFA Gold Rover stands ready to support Royal Navy warships operating in the region and will remain on task until next year when she comes to the end of her career.

At present there is one Royal Navy vessel stationed in the South Atlantic, Her Majesty’s Ship Clyde, protecting and reassuring residents in the UK Overseas Territories of the Falklands, St Helena, Tristan da Cunha and Ascension Island.

Over the past six months RFA Gold Rover has visited Simons’ Town in South Africa (for a maintenance stop), taken part in the multi-national Exercise Obangame Express 16 off the West Coast of Africa, visited Sekondi in Ghana, Freetown in Sierra Leone (where the ship’s company assisted with repairs and maintenance to the Milton Margai School For The Blind) and visited Ascension Island and the Falkland Islands.

Into the future, she will assist with wider Naval exercises with vessels from numerous countries, continuing to build relations before supporting the next warship to head to the South Atlantic.