POLICE OFFICER FOR A DAY 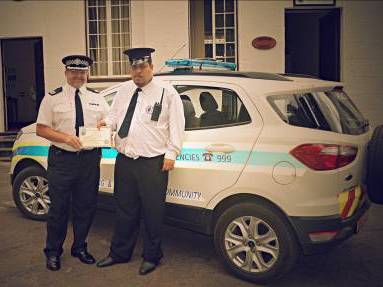 On Wednesday 15 June 2016 the Police Directorate welcomed special guest, Ashley George of Sapper Way, who spent the day with the Police.

Ashley had wished to be a ‘Police Officer for a Day’ and, in partnership with the Safeguarding Directorate, Ashley’s wish was granted.

Equipped with his Police cap, Officer for a Day badge and radio, Ashley was ready for action. His day comprised of riding in a new Police vehicle, training with the K9 Team, using the Police radio, vehicle siren, blue lights – and engaging with the community.

Ashley visited Prince Andrew School to meet teachers and students – a highlight for him was handcuffing (under the supervision of Officers) his proud mother Carol. Ashley also visited his place of work at SHAPE Recycling Centre where his colleagues were all very happy to see ‘Police Officer’ George.

Towards the end of Ashley’s visit he was presented with a ‘Police Officer for a Day’ Certificate by Chief of Police Trevor Botting, followed by lunch with Officers. Ashley was returned home safely where his father was waiting for him.

“This was a very successful day. I enjoyed the time spent with Ashley, but more importantly Ashley enjoyed his time with us. As part of our community engagement I am looking forward to doing more of this kind of thing in the future.”

“I had the pleasure of spending time with Ashley and one of the many highlights was the reaction and pride of his parents. I would like to thank the George family for the opportunity to be part of Ashley’s visit and it is something that I would like to do more of.”

“I was delighted to meet with Ashley and hear about his day with the St Helena Police Service – as well as presenting his certificate to recognise the time spent with Officers.”