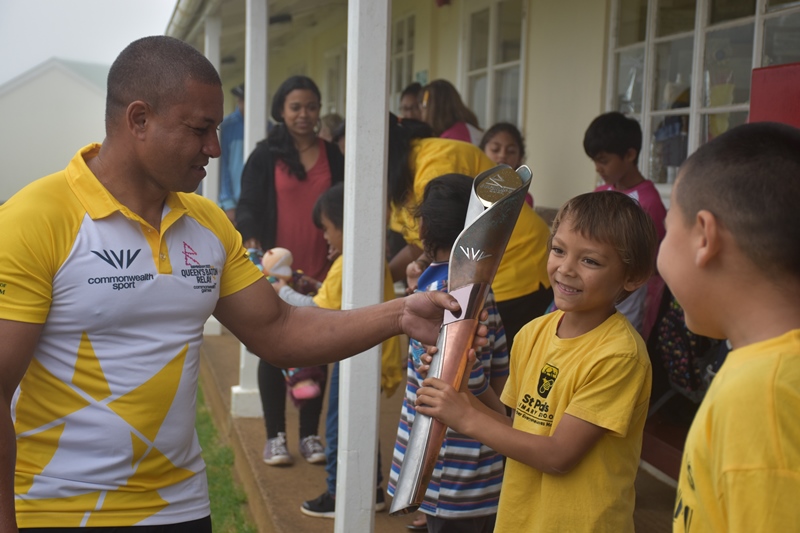 The Queen’s Baton was officially welcomed to St Helena on Sunday, 5 December 2021, by H.E the Governor Dr Governor Philip Rushbrook and St Helena’s, Commonwealth Games Association’s (CGA) President, Nick Stevens. The CGA were the organisers for the Batons busy two day schedule. The Baton came from Botswana and St Helena was the 17th destination out of the 72 Commonwealth Nations and Territories it will be visiting throughout the Queens Baton Relay.

At 8am on Sunday, an entourage comprising of CGA members, local athletes, media and photographers/videographers started the Island wide tour with the Baton.  They travelled through the Island districts, with planned stops for members of the community to have a chance to hold and have sight of the Baton. The Baton was taken to Diana’s Peak, Care Facilities and the General Hospital before making its way through Jamestown.

“The community really supported the team and we tried to accommodate as much as possible on the day, what the community wanted as well.  We were allowed to touch the Baton and fully interact with it as opposed to other countries, which was a truly unique opportunity”.

On Monday morning the Baton visited all of the Island schools. At Prince Andrew School students and staff lined the 400m sports track and passed the Baton around the entire circumference. School President, Amy Thomas gave a speech accompanied by the St Helena swim team who are currently training for qualifiers in order to participate in the Birmingham 2022 Games or future games.

The Baton was relayed up Jacob’s Ladder and then travelled to the Jamestown Wharf where a group of Prince Andrew School students and members of the Island swim team then performed a relay swimming the Baton to the SS Papanui.

A reception at Plantation House concluded the Batons journey on St Helena.

“It has been an excellent two days around the Island. Thank you everyone for taking part in what was a real community effort. Congratulations on making it to the finishing line. Thank you to the relay team, Nicky and the organisers, for all your hard work for the good of the Island.”

CGA President, Nicky Stevens, commented that he felt the event was well organised, with great teamwork and gave thanks to all involved, especially to those persons who covered the events.

The Queens Baton comes with a message compartment where the Queen’s message to athletes was inserted at the start of the Relay. The Baton is fitted with a 360-degree camera, LED lighting and a heartrate sensor that display the heartbeats of Batonbearers.