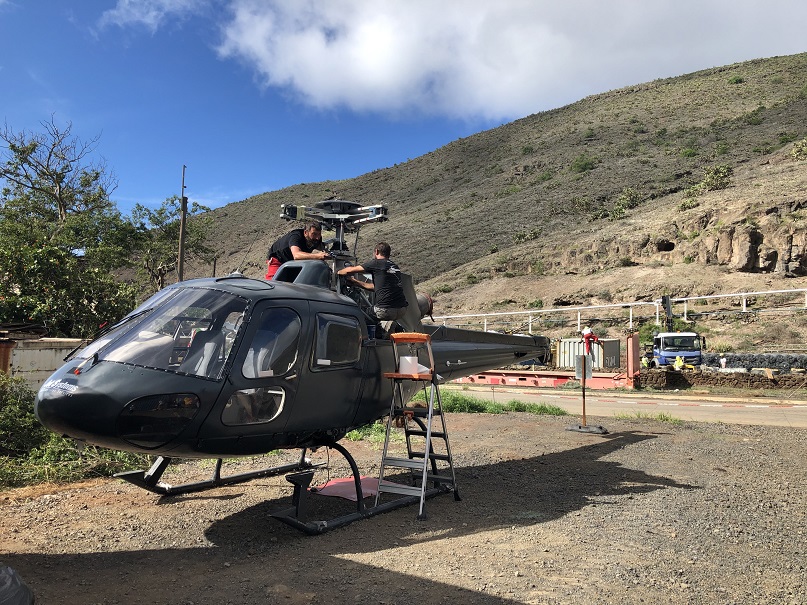 A JET Systems helicopter took to St Helena skies last week, 10 years since their last visit to the Island. The helicopter will be here for two months as part of the CAN France rockfall protection works. Using a helicopter speeds up the construction process as it allows heavy loads to be quickly transported to high, steep slopes with very little manual handling.

The test flight was carried out on Saturday, 4 April 2020, from the helipad in Rupert’s Valley, with a short trip to assess take-off and landing conditions. Since Monday, 6 April, the helicopter has been seen around Rupert’s and James Valleys, transporting drilling and grouting equipment. The helicopter will soon begin transporting rockfall catchfences and netting into place.

For Pilot, Francois Gillet, this is his first trip to St Helena, but he has worked with CAN France on many occasions. Mechanic, Olivier Merchat, was here for the 2010 Jamestown rockfall protection works.

Short closures of Field Road, near Wicked Wahoo, in Rupert’s, will take place when the helicopter is carrying a load overhead. These closures will be for a couple of minutes maximum and will be controlled by traffic marshals. The closure of Rupert’s Wharf and Jetty continues as previously announced. Access requests can be made to CAN France Contracts Manager, Arthur Bourret, at the site compound in Rupert’s. The project team would like to thank the community for their patience.

Questions on any aspect of the Project can be directed to Project Supervisor, Catherine Inglis, via email: catherine.inglis@fairhurst.co.uk.