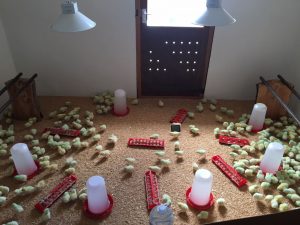 The second consignment of ‘day old’ chickens (chicks) was successfully flown into St Helena on Saturday, 12 January 2019, and are currently under the quarantine process.

“Even at this age, the chicks come vaccinated against a range of diseases administered by spray, but we can never rule out a disease breakdown in South Africa. Hence, by law, the chicks are placed into the Rupert’s Quarantine Station for a period of four weeks where we care for them and observe for any issues.

“At the moment the Veterinary Section is attending three times daily to freshen the drinkers and feeders. Personnel wear dedicated suits and boots and pass through footbaths before entering or leaving. In addition, we have a problem with fowl pox on the Island, transmitted by mosquitos, and cannot vaccinate the chickens until four weeks of age. Hence all windows, doors, vent holes and roof spaces have been either meshed or sealed, and the mesh sprayed with insecticide. The chicks will be vaccinated prior to distribution.”

In a few weeks’ time, providing that the chicks are healthy and thriving, the Agriculture & Natural Resources Division (ANRD) hopes that the chicks will be made available for sale to the public. The chicks are already oversubscribed, but members of the public who are next on the list will be contacted closer to the time of distribution.

The chicks are Dekalb Amberlinks – a white commercial laying hen that comes into lay between 16 and 20 weeks and, if reared and kept well, can produce 340 eggs in one year.

ANRD anticipates a third consignment of 1000 ‘day old’ chicks in the next couple of months.

In 2018, ANRD established that there was a shortage and high demand for hen eggs on the Island. To alleviate this problem, ANRD developed a plan to air freight 1000 ‘day old’ chicks in the hope of resupplying the Island with a regular supply of fresh local eggs.

The chicks are procured from a highly biosecure commercial unit that is monitored by the South African Department of Agriculture, Forestry and Fisheries (DAFF). The chicks are specially incubated to hatch out on the Friday before the Saturday flight. They are delivered to OR Tambo International Airport, in Johannesburg, at 3am GMT fresh out of the shell. ‘Day old’ chicks rely on their yolk sacs for food and fluid and can be legally flown around the world for up to 72 hours. The process of clearance with South African Customs and SA Airlink is not simple but is handled expertly by an agent who handles the extensive paperwork.

The first successful consignment of 1000 ‘day old’ chicks was flown into St Helena, via the SA Airlink flight, on Saturday, 29 September 2018. Shortly after their arrival, the chicks were taken to the Quarantine Station in Rupert’s Valley where, by law, they spent four weeks in isolation.

Following the four weeks spent under quarantine, the first batch of chicks, were ready to be sold to the general public at a price of £2.50 each and, since being distributed to the public, ANRD have recently received news that the very first eggs have been laid.