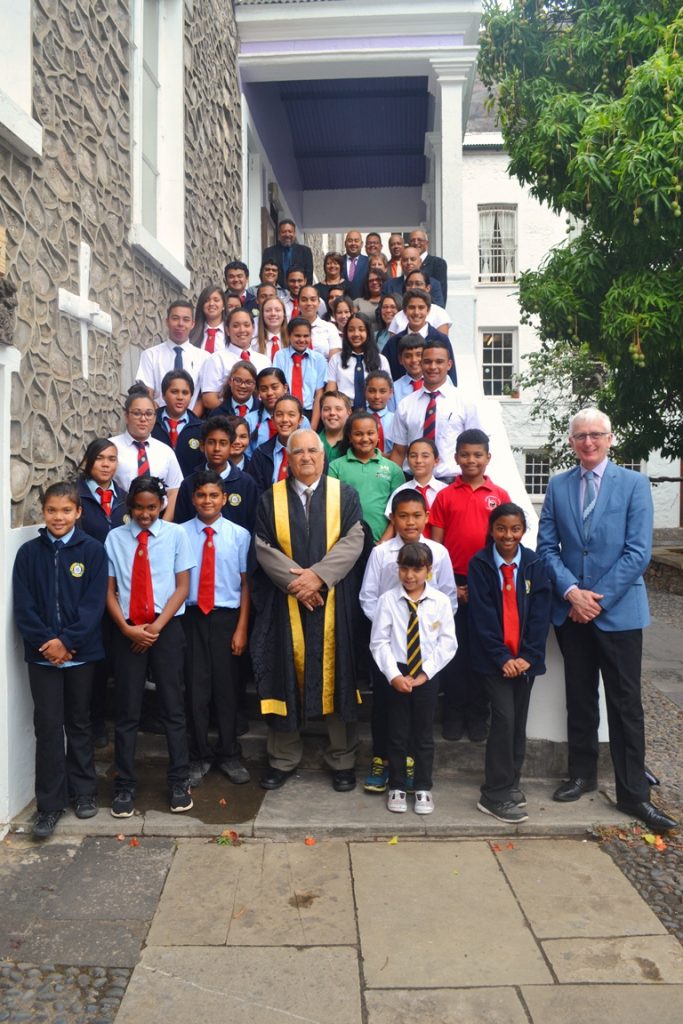 The first sitting of the Establishment of a Youth Parliament on St Helena took place in the Council Chamber at 10am on Friday, 22 November 2019.

The event, which mirrored the style and format of Formal Legislative Council Meetings, began with the formal entry of the President, the Speaker, Mr John Cranfield, followed by prayers.

Children’s Champion, Councillor Derek Thomas, then addressed all in attendance and spoke about the purpose of the Youth Parliament. He explained:

“The purpose of the establishment of a Youth Parliament is to get young people more involved in the democratic process and to increase their political awareness. It will also provide an opportunity for young people to express their views and contribute to decision making.”

The final address was given by Acting Director of Education, Kerry Lawrence, who again recognised the significance of involving the Island’s youth in the democratic process.

Colby then spoke to the Motion where he gave an example of a restructured timetable that would reduce lessons to 45 minutes, allowing time for a further lesson to be included within the day. His timetable also allowed for an earlier break and extended lunch break to allow for the reintegration of the inter-House sports competition.

The Motion was debated by members of the local School Council with some very good points being made in support of and against the Motion.

The Motion received an equal number of ‘ayes’ and ‘nos’ resulting in the Speaker making the final decision. He chose to support and pass the Motion.

The meeting concluded with the Adjournment Debate – customary at Formal Legislative Council meetings. This gave Elected Members as well as the Chief Secretary a chance to commend the students on an interesting debate and show their support to the re-establishment of the Youth Parliament.

“The Youth Parliament is an exciting event for St Helena, providing our children and young people with a real opportunity to engage with Councillors and give their view on issues that matter to them. I thank the speakers, the Student Council, and Councillors Derek Thomas, Christine Scipio, and Lawson Henry, for their work and look forward to the Parliament discussing and examining more topics of importance to St Helena and their future.”

“The launch of the Youth Parliament is a great opportunity for our youth to participate in the Political Arena and be able to properly raise issues which are relevant to their educational needs. The Youth Parliament will have the opportunity to bring issues forward to School Management and the Education Committee and to meet with their Elected Representatives in order to ask questions and table Motions following the Legislative Council model. It is anticipated that support will be given from the Commonwealth Parliamentary Association, who heavily supports youth development through networking and conferences around the world.”

“I thought the launch of the Youth Parliament was really successful. There were some good points that we made in support of the Motion and there were also some good points made by the opposing side, all of which will be taken into consideration. The establishment of a Youth Parliament will allow us to discuss these, and other important matters, and hopefully develop better solutions for all.”