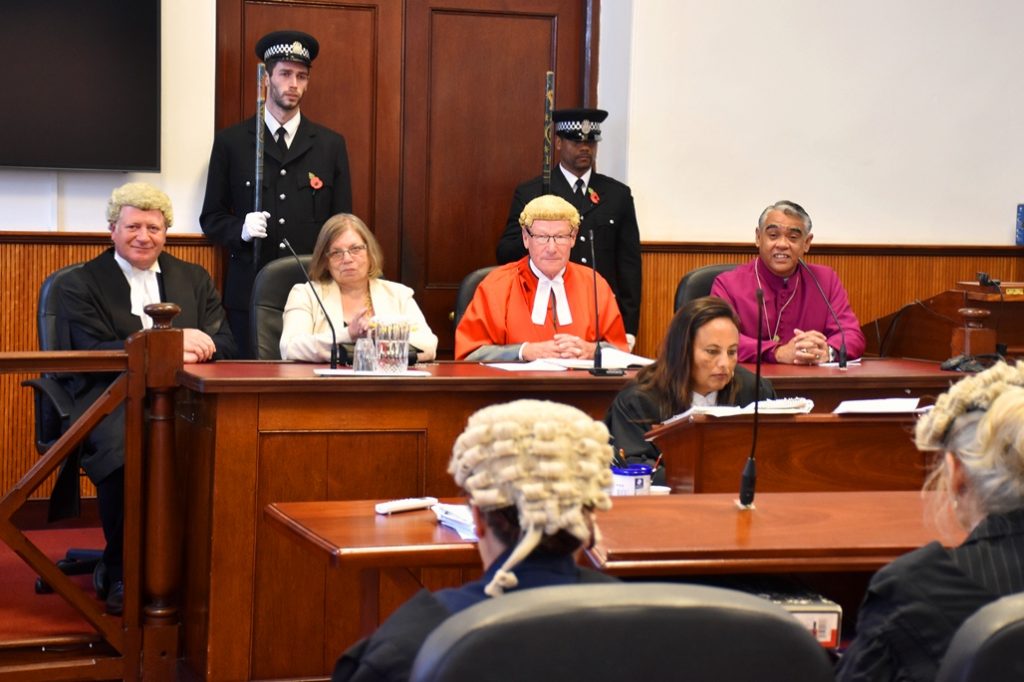 The formal opening of the St Helena Supreme Court took place at 9am today, Monday 11 November 2019.

The opening commenced as His Lordship, the Chief Justice, Charles Ekins Esq, entered the Courthouse accompanied by the Sheriff of St Helena, Mrs Ethel Yon OBE, Bishop Dale Bowers, and Chief Magistrate, Nicholas Aldridge (see photo). Lawyers, Justices of the Peace, officials, and members of the public were also in attendance.

This was followed by an address from the Chief Justice. In his address the Chief Justice acknowledged today being a day of remembrance. He spoke about remembering the Rule of Law and its importance.

“In essence the Rule of Law is the guardian of any civilised society. Everyone in this community is innately connected to the Rule of Law and has a role in upholding it. It is, I think, sometimes a concept that we take for granted, but, as I say, at this time of remembrance, it is worth acknowledging the central role that it plays in our society and giving thanks, therefore, for those who have enabled its preservation.”

The Chief Justice then spoke directly to members of the AG’s Chambers, Public Solicitors Office and Probation Service. He welcomed Crown Counsel (Civil Litigation) Bianca Huggins and Crown Counsel (Criminal) Amanda Bailey to their first sitting of Supreme Court before acknowledging the important role of Catherine Williams as the new Legislative Drafter within the AG’s Chambers. The Chief Justice then said it was a pleasure to see Assistant Crown Counsel, Alwyn Thomas, back within the AG’s Chambers before stating his disappointment that Legal Officer, Nikita Crowie, would be leaving. Finally, His Lordship welcomed Kylie Hercules to the Public Solicitor’s Office and Laura Aston to the Probation Service and said he looked forward to the continuing assistance of the Probation team.

The St Helena Supreme Court will continue until Friday, 29 November 2019.