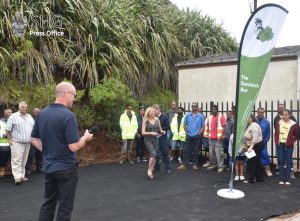 In his opening speech, Connect’s CEO, Barry Hubbard, welcomed everyone and thanked those involved in the creation of the new reservoir, making special mention of the person who many years ago had the foresight to secure the site for future development of this reservoir. He stressed the importance of a structured approach to the Island’s development, which will require optimal sites to be identified and earmarked for new utilities infrastructure in the future.

Connect’s Operations Director, Leon de Wet, highlighted the need for the reservoir development programme to be further supported by SHG and other stakeholders in order to address the raw water needs of the Island – making it more resilient towards both short-term and longer-term drought events. 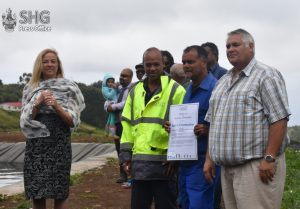 Hutt’s Gate reservoir holds 11,200 cubic metres of water and is five times larger than the existing one at the Hutt’s Gate water treatment works. With normal consumption, the water in this new reservoir will last for about 40 days. The design for this reservoir, along with a number of other reservoirs, commenced in April 2015. The procurement process commenced in April 2016, with works beginning in November 2016.

Invited guests, Connect staff and members of the public then proceeded to the reservoir itself to witness Her Excellency, Governor Lisa Phillips, turning off the valve feeding water into the full reservoir, and the handover certificate being presented from the project team – Isaac’s Construction – to Paul Duncan, who is responsible for water operations. 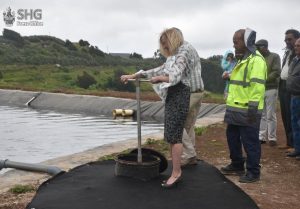