A Ladies Gala evening to raise funds for an Older Persons trip to Ascension Island was successfully held at Plantation House on Saturday, 1 July 2017.

A total of £1772.00 (including donations) was raised from the evening and will be used to send a group of 25 older persons to Ascension Island, including 15 of who have never been there before. The group, accompanied by carers and staff of the Older Persons Services, will depart the Island on Tuesday, 11 July, and return on Sunday, 16 July 2017.

Organised by Debbie Stroud of Plantation House and Debbie Leo and Samantha Royles from Older Persons Services, the event – which sold out all 135 tickets – started at 7.30pm and saw ladies clad in evening and cocktail dress arriving to the smooth welcoming tunes of Brian Yon on the saxophone and then greeted by Governor Lisa Phillips and a complimentary cocktail.

Compere for the evening was John Woollacott and the entertainment kicked off with a dance performance by Nicola Essex and Angelo Berbotto. Nicola and Angelo also took to the floor later in the evening for a ‘dance off’ with John Woollacott and Lydia Buchanan – much to everyone’s delight. There were party games led by Debbie Knipe and music for dancing by DJs Wayne Crowie and Julian Fowler. 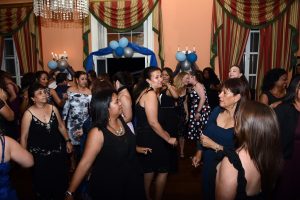 Photographer, Daniel Stroud, was in high demand as the ladies took professional photographs on the grand staircase and Amphibians Bar kept everyone refreshed with drinks – both also made kind donations. Ladies were also able to buy raffle and tombola tickets to win some great prizes, while G-Unique and Beauty Spot stalls encouraged everyone to treat themselves to jewellery and beauty products.

“The event was amazing – an extremely successful evening in terms of monies raised and the many favourable comments received. We’ve also been asked about this becoming an annual event.

“The success of the evening was really the effort of everyone, including the ladies who bought tickets and made the evening such fun.”

Three photos courtesy of Daniel Stroud are attached to this press release.