Attorney General, Angelo Berbotto, departs the Island tomorrow, Saturday 27 January 2018, after spending two and a half years on St Helena. 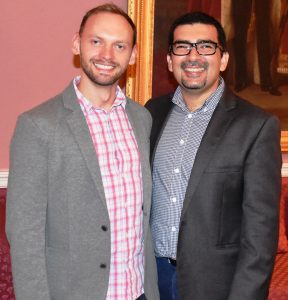 “I am truly grateful for the time Szymon and I have had here. St Helena is a beautiful island. We have met great people and made friends for life and look forward to returning in the future to visit. It has been a privilege serving as AG. I am grateful for the opportunity.

“I will miss my team. They have supported me and we have achieved our goals. Since 2015 to date, I have seen positive changes on St Helena and I am convinced that the Island has a bright future ahead.”

“I am very grateful for the work Angelo has done during his tenure, not just for St Helena but for Ascension and Tristan da Cunha too.  He leaves a strong legacy of legislation which will allow the islands to grow economically and will allow citizens’ rights to be better protected.

“Angelo has also been AG under a time when prosecutions and other cases have been at their highest, in terms of numbers, in recent history meaning that the judicial system is working well. And he and his partner have also contributed to many other areas in the community, particularly through their charity work. I am particularly grateful to them both for that. I wish them well.”