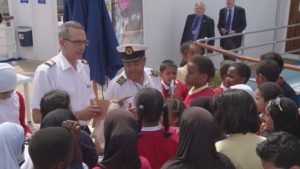 The Royal Mail Group in the UK helped to mark the final voyage of the RMS St Helena from the UK – the last working Royal Mail Ship – with a special Pen-Pal exchange between children from St Paul’s Primary, Pilling Primary and Harford Primary Schools on St Helena with pupils from Mount Stuart Primary School in Cardiff, Wales.  Each group of students wrote about their own lives.

The current RMS St Helena originally set sail from Cardiff to St Helena 26 years ago. Since then she has undertaken 243 round trips, covering more than 1.1 million miles and carrying thousands of letters and parcels.

“The children were so excited to be involved in such a fascinating project. They are so inquisitive about the wider world and this fabulous exchange has given them the chance to discover first-hand how different peoples’ lives can be.”

“It is great that the Royal Mail has marked the last voyage of the RMS St Helena.  As one of the most isolated islands in the world, a lot of communication is done by letter – this means the arrival of the ship is eagerly awaited by the population – waiting to receive letters, parcels and for the shops to be restocked.”

“Over the last 500 years, the postal service has provided an invaluable communication channel for those in the UK and across the globe.  We are delighted to have marked the final journey of this unique ship from the UK and feel certain that letters will continue to play a vital role in the lives of residents of this remote British Overseas Territory.”