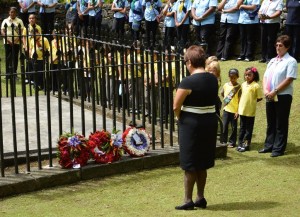 Father Dale Bowers led the Commemoration with Prayers, followed by a one minute silence, signalled by the playing of the Reveille.  The British National Anthem was sung by the ‘Bug Eyed Tuners’, followed by ‘La Marseillaise’, accompanied by the ‘Brass Monkeys’.

The Commemoration ended with the Laying of Wreaths by Tom Holvey for the French Nation, HE Governor Lisa Phillips for St Helena, Susan O’Bey on behalf of La Fondation Napoleon, and Christopher Pickard for St Helena Tourism. 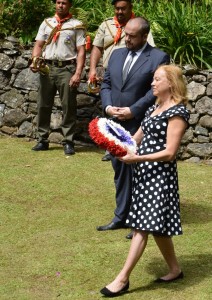 The event continues the annual Commemoration of Napoleon’s death that began on St Helena in 2011, to coincide with the Commemoration that takes place at Les Invalides in Paris, France – where Napoleon’s body is now interred.

Three pictures are attached to this release, kindly provided by St Helena Tourism.